In today's episode, Dharani mentions how she likes a green saree and Aditya buys one for her. Read the full update here. 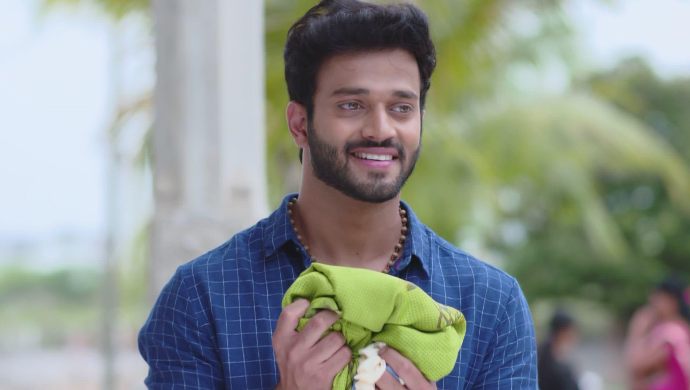 In the last episode of Attarintlo Akka Chellellu, Shravani questions Vikram’s feelings for her and calls him up. She is reassured about his love for her and starts focusing on getting rid of the pelli choopulu happening the next day. Dharani comes home from work and brings biryani for Aditya, as he had asked for it. She lies to him about fasting because she couldn’t afford two plates of food. The next day, Hamsa brings a bowl of payasam for them and Aditya thanks her.

In today’s episode, Vikram tells Vedavati that it would have been better if Abhi had brought them home instead of giving them the car. Vedavati tells them that the pooja may be a way for the gods to do what they have been unable to do. The next morning, Hamsa brings payasam for Dharani and Aditya. Aditya tells Hamsa that he likes payasam a lot. He asks if she made it for him and Hamsa nods. But Shivudu butts in and asks Aditya why his wife would make payasam for him. He tells them that it’s their wedding anniversary.

Aditya steps ahead to hug Shivudu and wish him on this special day. Shivudu thanks Aditya but stops him when he moves towards Hamsa to hug her. Shivudu tells them that he bought a new saree for Hamsa and Dharani appreciates the colour of the saree. Aditya tells them innocently that the saree would look much better on Dharani. But Shivudu tells him: “No, the saree looks better on Hamsa.” Aditya moves towards Hamsa to ask for the saree so that his tailor could try it on. But Dharani and Shivudu try to stop him.

Priyamvada tells her brother, Vayuputra, to not waste their time in poojas and other stuff. Because if Aditya really had to come home, he would have found his way. Vayuputra tells her to keep her negativity away if she does not believe in god. But asks her to not disturb the ones who do believe. Vikram steps in and backs Priyamvada by telling his father that she truly believes in god and wants the best for Aditya. That’s why she has prayed to the god and will complete 108 pradakshinas around the temple, on her knees. Aditya sits around the temple and thinks of how his wife starved to feed him last night.

Aditya decides to get a job and keep Dharani happy. And make sure that she does not have to work outside. That’s when he hears a man selling sarees on a cycle. Aditya postpones his plan. He thinks to himself that he will buy the saree today and get a job tomorrow. The salesman takes advantage of Aditya’s innocence and sells a saree that’s worth Rs 100 for Rs 1,000. Aditya uses Dharani’s savings without her knowledge and buys it. Vedavati prays to the gods to keep her son safe and happy, to bring him back to her soon. That’s when the temple bells start to ring louder and louder. A Kalabhairava Swamy, who was deep in his meditation, opens his eyes and rushes towards Vedavati.