In the latest episode of Attarintlo Akka Chellellu, Mallesh and his boys try to kidnap Dharani but Priyamvada comes just in time to save her from them 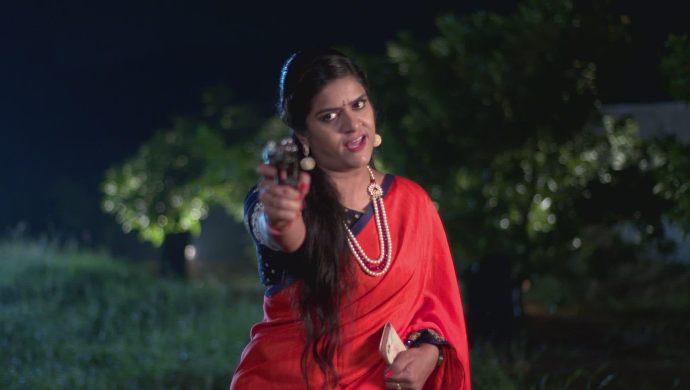 Earlier, in Attarintlo Akka Chellellu, Vikram tells Shravani not to worry when she expresses her concern regarding the differences in their jatakam for the wedding. He adds that there are multiple ways to solve such trivial problems and assures her that they will be married soon. Shravani hangs up the phone and is happy to know that Vikram would want to marry her, no matter what. Vedavati prepares for their wedding and Priyamvada pokes a fake story to see how deeply Vedavati is affected by Aditya’s wedding. Dharani and Aditya have a moment together and Shivudu sees it. They step away from each other and Dharani asks him to get ready for dinner. Shivudu goes aside and calls Mallesh to tell them about their plan.

In today’s episode, Godawari angrily swears that if Narayana tries to take Dharani’s memories away from her, he will see her dead boy. Shivudu thinks that there is only one day until he gets Dharani out of the house and take her Saiydamma. Aditya calls out to Shivudu for dinner and breathes in the fragrance of the fish curry that Dharani made for them. They all eat together and Dharani ends up hurting herself, Aditya offers to feed her. Shivudu gets angry at this sight and leaves.

Aditya wonders why he left suddenly and Dharani assumes that it’s probably because he misses Hamsa. Saiydamma tries to feed Shankarayya but he refuses to take a single morsel until she leaves Dharani on her own. Saiydamma promises to bring Dharani back to him because he likes her so much. Shankarayya asks his mother to not do anything to Dharani and leave the idea of marrying them. When Shankarayya does not listen to Saiydamma, she calls Shivudu and tells him about what happened.

Shivudu tells Shankarayya to do as they say or the consequences would be bad. He shows Dharani sleeping in her room on the video call and tells that killing her is not a big deal. Shankarayya begs Shivudu to keep her safe and agrees to have his dinner. Later, Shivudu brings Mallesh and a few boys who wear masks and have ropes and rods in their hands. Shivudu guides them towards Aditya’s bed and they hit on Aditya’s head with a rod. Then the boys wearing masks start acting as if they are hitting Shivudu and tie him to a chair.

Dharani comes out and sees all of it. She starts yelling so that the boys would leave and tries to wake Aditya up. But in that moment, the boys gather around Dharani and try to drag her out of the house. Dharani tries to get out of their grip when Priyamvada comes and points a gun at the boys. She asks them to leave the girl alone and get out of there. Shivudu tricks Priyamvada into turning behind and asks the boys to go. He tells Priyamvada that he will try and get hold of them.

Maate Mantramu: Vasundhara Finds Out The Truth About Murali's Fake Identity And His Plans