In the latest episode of Attarintlo Akka Chellellu, Dharani uses every opportunity to tease Aditya. Read more about it here 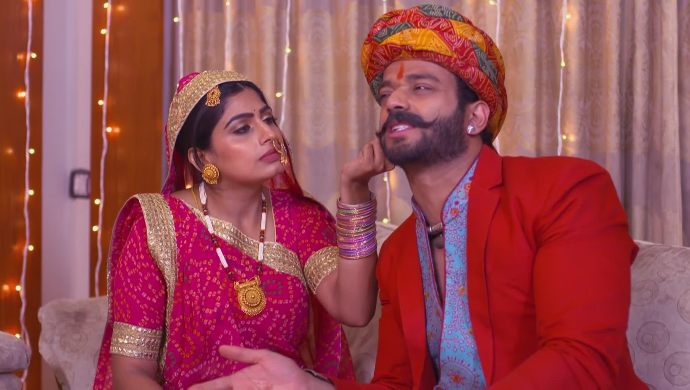 Earlier in Attarinlo Akka Chellellu, when Dharani and Hamsa think of ways to tackle Priyamvada’s situation, they come up with a solution. Dharani dresses up as Shravani and goes to talk to Vedavati, Hamsa keeps her busy. Dharani tells Vedavati that she would like a small wedding and the rest of the money could be used to buy gifts for the employees. Vedavati is overwhelmed to hear this and agrees to it. Hamsa keeps her busy but at one point she leaves the room. Dharani hides in a corner when Shravani thinks that she does not need to thank anyone.

In today’s episode, Dharani forces Aditya to have coffee and when he denies it, she calls out “Attayya” to scare him. Aditya fears that his mother will come out for real and asks her to keep it low. But Dharani does not stop until he has coffee. Later, a lady approaches Vedavati asks why she was working when they are spending Rs. 300 cr for the wedding. Vedavati gathers everyone and tells them that the wedding will be not that costly. It’ll be a humble one, as suggested by a great and considerate lady. Vikram assumes its Shravani.

Shravani is annoyed to hear this news. She thinks to herself why would she let so much money go away from her. Dharani, who is standing close to Shravani, apologises to Shravani in her thoughts. Because she knew what Shravani always dreamt of and now that it is being taken away, she is heartbroken. Priyamvada understands that Shravani has done this to beat her at her game. The lawyer ends up laughing at her but Priyamvada slaps him and tells him to stay in his limits.

Vedavati, Shravani, Vikram sit to finalise the wedding card. Vikram finds himself unable to make a decision. Vedavati asks Shravani to decide but Aditya, who is standing behind Vikram, bends down, picks up a card and asks Vikram to see it. He refers to Vikram as “Annaya”. Everyone turns to see him and Aditya apologises, calls him sir. Vikram asks him to continue calling him Annaya and finalises the same card. This reminds him of Nani and he tells Priyamvada that he will go ahead with the same card.

Priyamvada expresses her annoyance because Vedavati and Vikram talk about Aditya. She asks if Shravani will have a say in it but Vikram says her his decision will be the final one. This infuriates Shravani but she does not say anything. Later, Dharani sits with Aditya in a corner with the weddings cards and asks him to pick one for them. Aditya reminds her that they are married already but Dharani insists that it would a be good things to show to their kids.

Aditya is reminded of his wedding day and Dharani has to snap him back. When he refuses to do it, she threatens to call Vedavati again. Aditya is scared and picks one for her and runs away.

EXCLUSIVE: Here's ALL That Happened In The Finale Episode of ZEE HEROES