In the latest episode of Attarintlo Akka Chellellu, Aditya writes a love letter to Dharani and asks Priyamvada to deliver it. 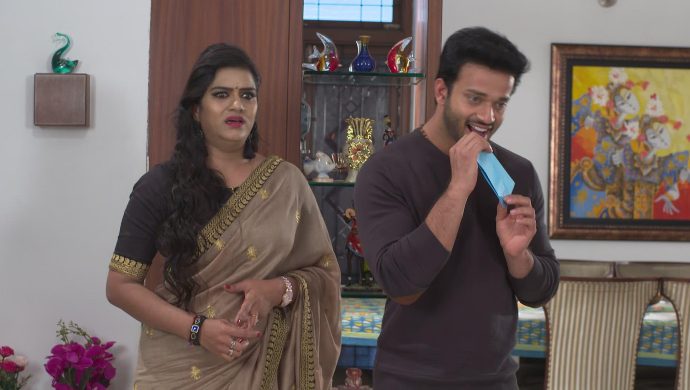 Earlier in Attarintlo Akka Chellellu, Priyamvada convinces Vedavati that Dharani has mixed unhealthy products to make the food delicious. When Dharani returns from the kitchen, Vedavati asks her to take time off from the kitchen and focus on the Educational Trust. Dharani starts wondering where she went wrong. Aditya comes and explains that he will be hitting on her like a lover. He also adds that she must act accordingly, without any fear about him being her husband. Shobhan Raju tells Shashikala and Priyamvada that their next move will involve getting Dharani stuck in financial fraud.

In today’s episode, Dharani remembers how her father begged the school principal to admit her and Shravani. She tells the accountant to consider their needs and allot the required money to them. The accountant mentions that he has the cheque ready for signature. Dharani signs it and asks the young kids to study well. The accountant informs Shobhan Raju that the work is done, and asks him to let go of his wife. That’s when Shobhan Raju reveals, he never held the accountant’s wife captive. Shobhan also passes on the message to Shashikala and Priyamvada.

Aditya wonders how to write a letter, and suddenly a bell rings in his head. Without any delay, he starts penning the letter. He wonders if he should deliver it to his ‘lover’ himself because in films it’s the hero’s friends are the ones who do it. So, Aditya sees Priyamvada and asks her to deliver it to Dharani, and also bring Dharani’s letter to him. When Priyamvada goes to give the letter, Dharani acts to be busy. Finally, she takes the letter and Priyamavada clarifies that it is by her (Dharani’s) ‘husband’, and not her. Aditya yells at Priyamvada to clarify that he isn’t her ‘husband’, but ‘lover’.

Dharani starts being shy, like a ’60s heroine, as Aditya tries to get a glance of her from behind the pillar. Priyamavada gets annoyed with them and goes away. Dharani feels happy and proud to have shown Priyamvada her place. Later, Shobhan Raju asks Priyamavada to get Hamsa to live in a new house, with the money that was directed to her account by the accountant. This will make Dharani look like a fraud, and they will be successful in maligning her.

ZEE5 Original Anaganaga: 6 Scenes From Ep. 1 That Will Peak Your Curiosity…