In today's episode, Aditya and Dharani confront each other about their thoughts and the distances between them. Read the full update here. 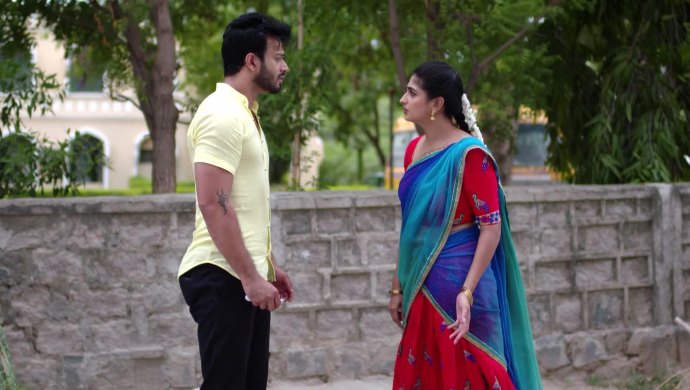 In the last episode of the Telugu TV show Attarintlo Akka Chellellu, Aditya and Dharani fought it out. At home, Shravani insulted her mother and Dharani for being jobless and wasting their time in useless things, like the Vata Savitri vratam. But neither of the women say anything to defend themselves. When Narayana taunts his wife, she feels sad but Dharani consoles her and asks her to carry on with the vratam.

In today’s episode, an old lady asks why Dharani wasn’t following the vratam even after knowing so much about it. Dharani tells her that she is unmarried. But the lady emphasises that she could still do the vratam because a man was brought to life along with her and for her. She hands over the thread to Dharani and asks her to tie it to the tree for the good health of her future husband. Dharani does as she is told when Vedavati and Aditya reach the temple. Aditya feels his heart race and believes that Dharani is close by him.

Aditya is in two minds — he wants to go and see ‘tailor’ — even Vikram had suggested doing that to forget her. But meeting her will make his mom feel sad. Finally, he decides to step away and tells his mother to proceed. Vedavati sees Dharani around the tree and feels happy to know that the girl his son (Vikram) loves is already praying for his good health. She prays to god to bring her as her daughter-in-law soon. Vedavati, too, goes to the tree to tie the thread, but follows Dharani’s trail.

Aditya starts playing games to distract himself from Dharani’s thoughts but fails. He starts walking away until his heart was sure that she isn’t around him. But Dharani starts walking in the same direction to buy more things for the pooja. Aditya comes close to a broken faulty electrical wire without paying heed to the women around warning him to stay away. Dharani calls out for him. She runs to save him, and both of them end up falling in a cement pit. The women consider them to be a married couple and tell Aditya that Dharani’s vratam has been fruitful, just like Savitri’s.

Dharani walks away and Aditya goes behind when he sees that she was hurt. He cleans the oozing blood with his handkerchief when Dharani starts yelling at him again. First, she yells at him for being careless and then for meeting her constantly. Aditya tells her that he is trying to forget her but is unable to do so. Dharani curses herself for being such a huge trouble to the poor boy.

Why Does Mrudula Break Down After All This Time In Ninne Pelladatha Suddenly?