In the latest episode of Attarintlo Akka Chellellu, Vedavati asks Dharani to stay away from the kitchen & not cook anymore. Read the full update here. 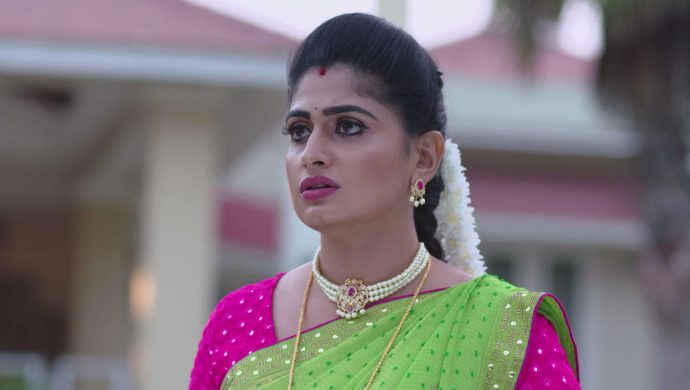 Earlier in Attarintlo Akka Chellellu, Priyamvada bullies Hamsa into doing whatever that she asks her to do. Hamsa tries to defend, but when Priyamvada asks the men to beat Shivudu more, she gives in. Priyamavada tells Hamsa to mix baking soda and Ajinomoto after getting the instructions from Shobhan Raju. When everyone starts to eat, Priyamvada proves a point against Dharani with the help of Hamsa and yet another househelp.

In today’s episode, the maid fuels the fire and Vedavati comes to believe that Dharani has been adding unhealthy products to enhance the last. When Dharani returns with the chutney, she offers some more garelu to Vayuputra. But he rejects the offer kindly and goes to his room. Vedavati also tells her to focus on the Educational Trust, moving ahead. Dharani starts wondering if she did something wrong and defends that she did not use any harmful products. However, Priyamavada signals that Dharani might be trying to cover up her mistakes.

Later, Aditya meets Dharani in the house and decides to hit on her. But Dharani does not get any hints. Aditya gets up and explains the whole situation. Aditya tells her that he will be hitting on her now on, like a lover, and she must react accordingly. He also adds that she mustn’t give in to the situation just because they are married. She must act as she feels, and he will make sure that she falls in love with her again. Dharani agrees to play along. Shobhan Raju connects with Priyamvada and Shashikala. He explains his next move, which involves getting Dharani stuck in financial fraud.

Zee Cine Awards Telugu 2020: Here Is Your Mini Dose Of All That Happened At The…

Birthday Special: Shruti Haasan Is A Style Chameleon Like No Other Actress

In a few minutes, Dharani meets the accountant from the Educational Trust. He talks about the few children whose careers would be ruined if they did not clear the scholarship in time. When the accountant informs that Vedavati has asked Dharani to take the final call, Dharani starts thinking hard over the talk.