In today's episode, Dharani goes to work but daydreams about having Aditya by her side. Read the full update here. 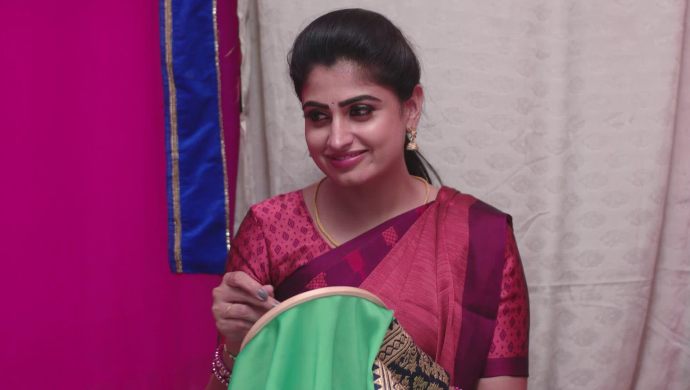 In the last episode of Attarintlo Akka Chellellu, after the lawn, Dharani prepares a makeshift bathroom and shower. Aditya is satisfied with his space and does not have a problem living there. Narayana finds a suitable match for Shravani and takes pride in how she will not disappoint him, unlike Dharani. Godavari challenges Shravani to marry the man her father has chosen and make him proud. Vedavati gives up on food because she is worried about Aditya.

In today’s episode, Vedavati continues to cry and worry about Aditya. But her husband, Vayuputra, tells her to be positive and host a celebration, as the priest suggested. They conclude that the best celebration could be Vikram’s wedding. When Vikram comes down, they announce this news and tell him that they will get him married to the girl he loves. Vikram is happy to hear that but wonders why they want to have a wedding when Aditya is missing. Vayuputra tells him that maybe that’s how Aditya will return home.

Priyamvada starts inquiring and tries to insinuate doubts about the girl’s opinions on marrying Vikram. She claims how the girl hasn’t tried to talk to him in four days. Vikram tries to shut Priyamvada up. And at that moment, Shravani sends a ‘good morning’ text to Vikram and he flashes it on her face. Vedavati tells him to ask the girl and they will take the matter further. Vedavati also tells him how she wanted to surprise Vikram directly during the engagement. But nothing of that sort will happen.

Aditya calls out to Dharani from the lawn and she comes out. He asks why she asked Shivudu to leave without him and Dharani explains that he does not need to work. She tells him about the job at the boutique that Hamsa helped her with. However, Aditya isn’t happy that he will be sitting at home while she goes out to work. They cut a deal where Dharani would allow him to work if he finds something he is used to doing. As she leaves, Aditya calls her twice to tell her to reach safely. Dharani leaves with a huge smile on her face.

Vikram meets Priyamvada again, in the absence of his parents. He tells her to watch her words. He adds that his mother is already in a vulnerable state and Priyamvada should avoid her unnecessary questions. After Vikram leaves, Priyamvada tells herself to let it go. She is preparing a ‘brahmastram‘ which she’ll use when it’s time. Dharani joins the women in the boutique and starts working when others try to pull her leg. Dharani starts daydreaming and assumes that Aditya was sitting with her.

Maate Mantramu: In The Midst of Murali's Identity Crisis, Anand And Alekhya Get Married