In today's episode, F2 has a word of caution for Dharani when she tells him about someone trying to snatch her hand. Read the full update here 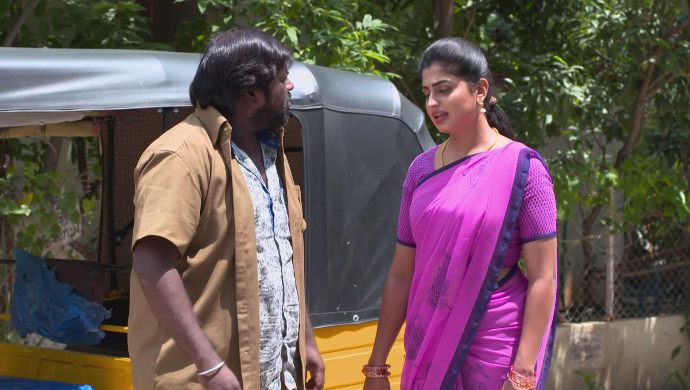 Earlier, in Attarintlo Akka Chellellu, Dharani comes home and tells Aditya about her encounter with Shankarayya. Aditya starts talking harshly about Shankarayya and Dharani explains to him the whole scenario. He then says that he should have killed Saiydamma the moment she slapped Dharani. He accuses her of living with him because he dragged her along. That’s when Dharani explains how she has always been in love with him and wanted to stay with him forever. Aditya is happy to hear this, he apologises to her and kisses her forehead. Vedavati continues to be concerned about Aditya’s well-being.

In today’ episode, Vedavati tells the priest about the symptoms that she has been noticing and expresses her concern for Aditya. The priest consoles her by saying that everything will be alright, now that they have done the Mrityunjay homam. But he asks for the jatakam of her sons. First, he sees Vikram’s jatakam and says that everything is working harmoniously. He then sees Aditya’s jatakam and tells that they needn’t worry about him either. However, problems are approaching his life-partner.

Vedavati asks if they can do anything to help the situation of Aditya’s life-partner. The priest asks them to try and arrange the jatakam of Aditya’s wife and that of the girl Vikram plans on marrying. Vikram steps out of the house and Vedavati asks him to get Shravani’s jatakam. Dharani cooks meals for Aditya and asks him to stay inside the house, take care of himself, and take the medicines without fail. Aditya tells her that he will be bored at home and asks if he can come along.

Hamsa tells Dharani to stay free of his worries and focus on her work. She promises to take care of Aditya and make sure he stays at home. Shivudu hears their conversation and decides that it would be a good time to take away Dharani to Saiydamma. Aditya tells her to go along with him and that’s when F2 comes and Aditya takes him inside and chit chat. Dharani stops F2 and asks him to drop her at work, instead of brainwashing Aditya. Shivudu tells him to go away and offers to drop Dharani but F2 takes her along.

Shivudu is upset that he missed an opportunity and decides to take her away anyhow. He follows their auto and when Dharani steps out, Shivudu tries to snatch her hand but Dharani moves away and tells F2 that she felt someone tried to snatch her hand. F2 asks her to be careful and come out only when he comes to take her home again. He sees Shivudu standing at the end of the lane and asks what he was doing there. To this, Shivudu responds harshly and asks him to get lost.

RIP Venu Madhav: The Man Who Tickled Every Funny Bone And Packed A Punch With…

Aditya is bored at home and keeps thinking about what he could do to entertain himself. Finally, he decides to join the boys to play cricket. Priyamvada understands that Vedavati will do whatever it takes to ensure the wellbeing of her family members. She wonders if Dharani’s problems are a plus point to her. Then she picks up her phone and calls Aditya but he does not respond. The boys in the field stop Aditya from batting and ask him to earn his way from fielding, bowling and then to batting.

A beggar decides that he will not let go until he finds the boy in the picture and demand a few crores from his parents. He sees kids playing and asks them but Aditya bats his way to hurt him on the head. The kids run away after seeing the beggar fall down. Aditya goes to help him, wearing a helmet. The beggar shows him his picture and Aditya stays quite.