In today's episode of Attarintlo Akka Chellellu, unwittingly Vedavati welcomes Aditya and Dharani in the best way possible. Read more about it here 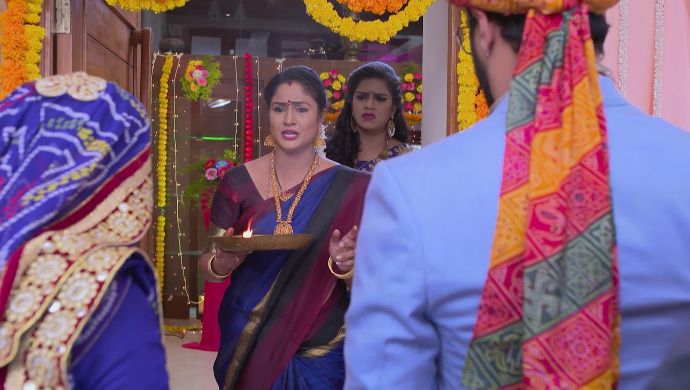 Earlier in Attarinlo Akka Chellellu, Priyamvada gets the responsibility to overlook the wedding prep. The lawyer asks for her help in stopping the wedding and Priyamvada makes him the supervisor of the event manager. Dharani, dressed as Shravani, comes and requests the event manager to hire four people on her behalf. Before making her way out, Priyamvada tries to taunt Shravani but gets a crisp answer. She calls her as Dharani. But to hide her truth, Dharani turns back and scolds Priyamvada for comparing her to Dharani. A little later, Aditya and everyone else comes in a different avatar to the house.

In today’s episode, Vedavati gets up from the pooja and yells ‘Nani’, calling out to Aditya. At the same time, Aditya, Dharani, F2, Shivudu and Hamsa make an entry. As Aditya starts walking towards the house, Vedavati feels him coming closer. She runs towards the entrance and is stopped by Dharani and Aditya, who are dressed as a Rajasthani couple. They take the blessing of Vedavati and enter the house. Aditya sees Vikram and hugs him, congratulating him.

Priyamvada keeps insisting on knowing their identities. Dharani explains that they are wedding planners. Her husband will look after all the wedding arrangements, Hamsa is the make-up artist and the two men, F2 and Shivudu, are the security guards. When Priyamvada asks about the girl herself, Dharani says that she will look at her husband. Hamsa adds that they are newlyweds and haven’t consummated their wedding. So, they have to be close to each other until it’s time.

Vikram tells his mother that he likes them and will be coordinating with them for everything. Priyamvada takes the credit by saying that she has brought them. Vedavati asks them to go into the rooms and freshen up before getting started with the work. Upstairs, the lawyer tries to flirt with Hamsa. Shivudu sees this and gets her out of the situation. Aditya and Dharani are stopped by the maid, who asks them to not enter Aditya’s room. Vedavati allows them to go in and settle there.

Dharani asks Vedavati about the boy in the pictures. Vedavati tells her that he is her younger son and he left her when she refused to fulfill one of his wishes. He forgot about all the love for one moment of anger. Aditya starts feeling sad but holds himself together. Vedavati tells them that she is hoping for her son to show up before the wedding. Dharani promises that her son will come.