In today's episode, Shravani dresses up as Dharani to meet Aditya. But before she can reach, Dharani is already with Aditya. Read the full update. 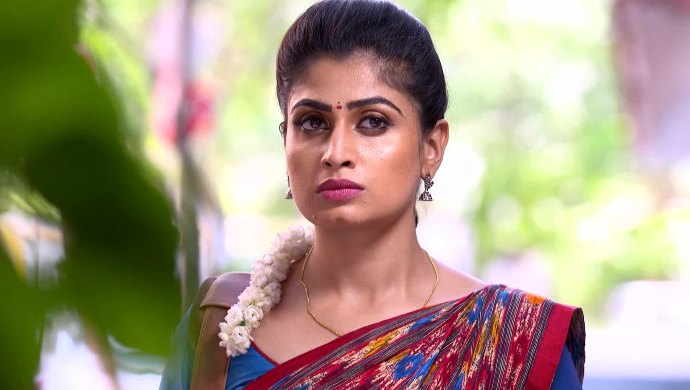 In the last episode of the Telugu TV show Attarintlo Akka Chellellu, we see that Shravani goes to convince Shanakarayya’s mother about the wedding. Shankarayya’s mother, Saidamma, demands dowry before deciding a wedding date. She tells Shravani that just because his sister is fair, it doesn’t mean that they can do away with old rituals. Here’s how Shravani deals with her.

Watch the full episode below:

In today’s episode, we see that Saidamma starts sweet-talking to Shravani and agrees to settle on her terms. Her plans though are to extort money post the wedding. Shravani reaches home and calls out to her father when her mother informs her that since he has loans to pay, he must be working extra hours or searching for help. She asks what the matter is, Shravani tells her that Saidamma has asked for Rs 7 lakhs for the wedding. She asks why has the dowry topic surfaced suddenly. She insists to let go of Shankarayya and speak to Aditya’s family instead. But Shravani tells her not to think too much and also tells her that they will not have to pay any dowry.

Shravani tells her mother that Shankarayya is good enough for Dharani and one must not expect too much for her. She hears Dharani’s phone ring and picks it up. It’s Babai from the tailoring shop, he says that Aditya is waiting for her and won’t move until he meets her. Shravani is furious that Dharani is keeping secrets from her and is still meeting Aditya. The phone rings again and this time Dharani picks it up. She realises that Shravani knows of Aditya coming and tries to handle the situation. But just in time, she sees Shravani dressed up as her. Shravani cannot bear that Dharani is meeting Aditya and so she decides to meet him and find out for herself.

Dharani suggests that Shravani can come along and listen to their conversation on the call but begs her to avoid meeting him. Aditya gets impatient waiting for Dharani in the meanwhile. Flashes from the temple continue to make him furious. Finally, she arrives and asks him what this is all about. Aditya informs that he was there to be around her to forget her sooner. As Dharani continues to yell at him, Aditya remains calm and boasts of how he is unaffected by her presence. Dharani tells him to stay away and not disturb others because of his wishes and also because she is getting married soon and she doesn’t want him to ruin it once again.

Aditya offers to help Dharani by funding her dowry and wedding hall. Dharani tells him the only help he must do for her is stay away from her. At this time, her call to Shravani gets disconnected and Shravani rushes to see what’s happening between them. Adding to her distress, Dharani slips and falls into Aditya’s arms at the very moment when Shravani reaches. Shravani wonders how their dialogues and actions are entirely different. But Dharani asks Aditya to stop holding her and gets back up. Aditya tells her to stop coming in her dreams and he would, too, stop disturbing her. At least, Shravani’s doubts about Dharani are cleared.

Stay tuned for more updates. In the meantime, check out the latest episodes of Maate Mantramu, on ZEE5, now before TV.

In Kalyana Vaibhogam, Nithya Makes Her Second Move To Take Manga On