In the latest episode of Attarintlo Akka Chellellu, Hamsa tells the truth about everything to Aditya, and he feels sad. Read the full update here. 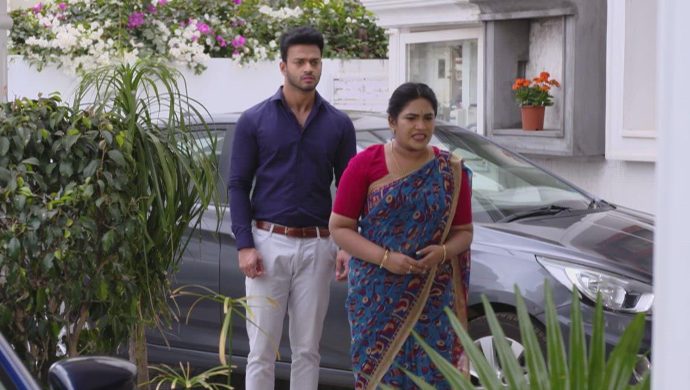 Earlier in Attarintlo Akka Chellellu, Aditya and Dharani end up in another silly argument. Vedavati tells Dharani to avoid any work, and subtly scolds her for trying to mislead Aditya. Vedavati acts cold to Vayuputra, after which Vayuputra scolds Priyamvada for everything. Vikram and Shravani talk about their honeymoon delay and Dharani’s behaviour.

In the upcoming episode, Shravani tells Vikram that they shouldn’t be wasting their Valentine’s Day bickering about other people and their problems. Hamsa sees Vikram pick up Shravani and twirl her around. She wonders how happy Dharani and Aditya would be if Priyamvada hadn’t ruined their relationship. That’s when she sees Aditya step out of the house, and calls out to him.

Hamsa asks Aditya about his plans for Valentine’s Day when he tells her that he is going out just so that he wouldn’t have to see Dharani’s face. Hamsa gets irked by his unreasonable behaviour, and asks him to hear her out as she reveals every single detail for which Dharani has been uncredited or wrongly blamed. By the end of it, Aditya has tears in his eyes and Dharani wonders if Hamsa told him the truth.

Aditya sees Dharani standing close by and turns towards her. He hugs her tightly as tears roll down his cheeks. Dharani asks him about the reason, and Aditya apologises for never understanding her. Dharani asks him to let go, but Aditya insists on correcting his mistake. He wishes her ‘Happy Valentine’s day’ and asks for a gift when she says it too. Aditya takes Dharani’s hand and drags her inside while calling out to everyone in the house.

Aditya tells them that he is extremely happy, and they will all celebrate Valentine’s day together. He sends them to get ready for the celebration. Vikram asks if this means that Dharani has made no mistake, and Aditya clarifies that she has, but sends him away, too. Priyamvada asks Hamsa how the tables had turned, but Hamsa does not respond.

Women’s Day Special: Dear Ladies, Here Are 5 Ways You Can Treat Yourself…

9 Scenes In ZEE5 Original Chadarangam That Will Keep You Hooked