In today's episode, Dharani tells Aditya that he couldn't see her love for him in her action and gestures. Read the full update here 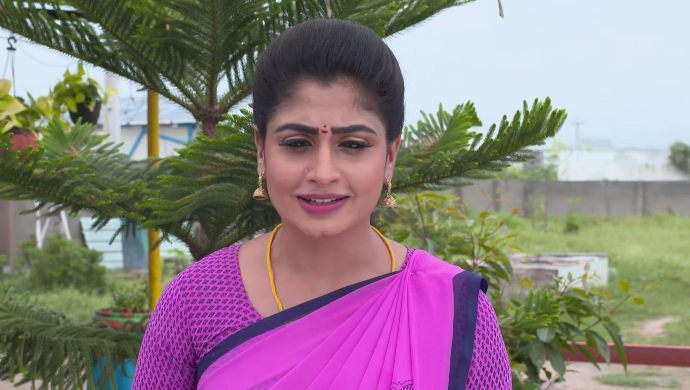 Earlier, in Attarintlo Akka Chellellu, Dharani and Aditya do not consummate their wedding because Dharani wants to wait for the right time. Shivudu injures himself to stop their shobhanam because he promises his sister to present Dharani as a virgin for her son. Dharani meets Shankarayya on the temple’s stairs and asks him to go back home. Vedavati panics because every time she prays for Aditya’s safety the deepam extinguishes. Godawari expresses her concern for Dharani, following many nightmares, to Sharavani.

In today’s episode, Godawari tells Shravani to stop talking rubbish and at least consider the fact that they are twins. Shravani starts ranting about how Dharani has never brought happiness to their lives. Now that she is away, they still cannot be happy and peaceful. Dharani comes from the temple and Aditya tells her to cook up breakfast for him. She offers him the prasadam and stops to talk about her meeting with Shankarayya.

Dharani talks about how he left home and ran away from Saiydamma, following her torture, and now sits in front of a temple to beg. This instantly angers Aditya and remembers all the moments when Shankarayya tried to come close to Dharani. He scolds her for still talking to him and says that he will break his bones for once and for all. Healso says that he should’ve killed Saiydamma the moment she slapped Dharani for the first time. Dharani tries to calm him down and explains that Shankarayya is a good person.

This enrages Aditya even more and he talks about how Dharani would have left him if he did not elope with her. He claims that he is the only one who is madly in love with her whilst she does not love him at all. Dharani has tears in her eyes and asks Aditya why was she feeling sad if he is the one suffering. She tells him that she is sad because Aditya hasn’t been able to understand or see her love. She reminds him of how she gave him all the opportunities to come closer to her.

If she wanted to stay away from him, it wasn’t a big deal. But unintentionally, she fell in love with him and wanted to spend her life with him. Every time that she thought of taking a step ahead, she was reminded of the promise she made to her father and held her feeling back. Aditya realises everything that Dharani spoke about and apologises to her. He says that the fact that she denied the consummation last night also angered him.

Dharani tells him that while some people can express their feelings easily, some cannot. Aditya inches closer,  hugs her and even gently kisses her forehead. She then tells him that all of that could happen only once they have the blessings of Aditya’s parents. Vedavato continues to cry and panic about Aditya. Vayuputra consoles her by telling that they are trying to do their best. A priest comes home and asks for permission to carry out certain rituals, Vedavati asks him to go ahead but cries that her son will not be with her.

Kalyana Vaibhogam: Swaroopa Brings Back The Past To Keep Nithya In Her Place