In the latest episode of Attarintlo Akka Chellellu, Priyamvada demands a ceremony announcing her as the owner. Read the full update here. 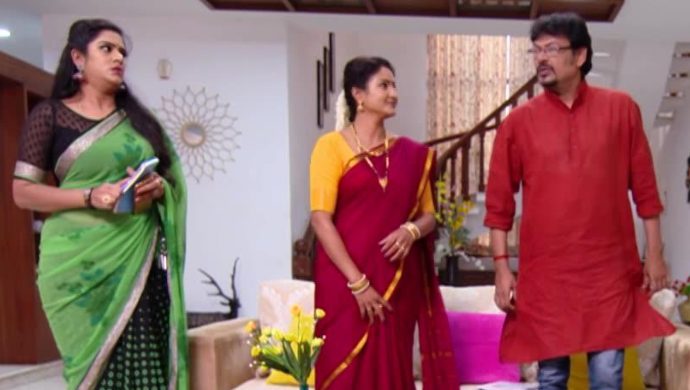 Earlier in Attarintlo Akka Chellellu, Vedavati calls the priest and asks him to fix up a new date to host the Shanti pooja before setting up the couples for their first night again. The priest suggests finding a way to make sure the couples agree to it. Priyamvada tries to suggest that the couples should be given a few years to get to know each other. But Vedavati ignores it. Priyamvada tries to ruin things before the priest gives a date, but Dharani hears it all.

In today’s episode, Dharani meets the builder who had sold a house to Priyamvada, for Narayana and Godawari. He gives her the money and Dharani decides to return it to respective people. Two members of an orphanage go to meet Vedavati, while ignoring Priyamvada. They talk about the orphanage and the kids sheltered there. Vedavati decides to donate some more money and asks Priyamvada to get the cheque book. This does not go down well with Priyamvada.

Priyamvada asks Vayuputra to host a ceremony and announce her as the lady of the house since she has the pettanam.  Vikram and Shobhan Raju try to reason her out of the ceremony, but Vayuputra agrees to go ahead with it. At the same time, Priyamvada asks for a solution for the money that Dharani stole. That’s when Dharani comes home and gives Priyamvada a cheque, and another to Vikram. She apologises and promises to fix her mistakes.

Read the full written update for the previous episodes here. Watch more episodes of Attarintlo Akka Chellellu on ZEE5, before it airs on TV. You can also get all the live updates on Coronavirus on ZEE5 News Section.

Reasons, Rituals And Richness! This Ugadi, Make The Traditional Pachadi In The…