Dharani and Aditya are coincidentally in the same temple. Unintentionally, Dharani signals Aditya towards herself. Here's how. 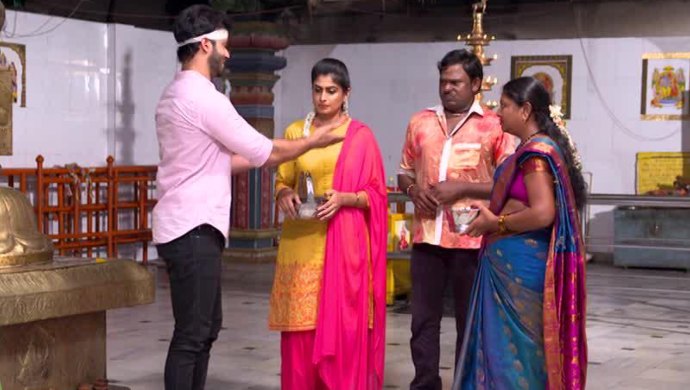 In the last episode of the Telugu TV show Attarintlo Akka Chellellu, Dharani saved her family from the goons and their threats. Yet, Shravani and Narayana do not respect her for it. They keep taunting her for making reckless choices and taking scary steps. Shankarayya visits Dharani and asks her to wear the dress he bought for her to the temple the next day. Aditya, who feels bad about ruining a perfectly good car, is gifted a second car by his brother Vikram. Dharani, Shankarayya, Vikram and Aditya end up in the same temple for different reasons.

In the episode to be aired on June 24, 2019, we see Dharani trying to break open a coconut. While doing that, a sharp piece of the broken coconut shell hits Aditya, who was praying to the deity close by. He comes looking for the person who hurt him and finds Dharani. Quite metaphorical, right? Dharani sees him coming towards her and is scared. Shankarayya, too, sees him and hides behind Dharani because he doesn’t want to be beaten up.

That’s when a lady in the temple tells Dharani to be a part of her vratam and bless her. The lady applies kumkuma on her forehead. She asks which one of the two men standing beside her was her husband, while also assuming Aditya to be the one. Dharani is too scared to answer, but Aditya takes a step back and tells the lady that he is not married to her. He points at Dharani and Shankarayya and tells her that they will be married soon.

Watch Samantha, Kajal Aggarwal, Pranitha And Mahesh Babu Together In The Hit Film Brahmotsavam On ZEE5

ABCD Review: On-Screen BFFs Allu Sirish And Bharat Will Take You On A Joy Ride