In today's episode, Dharani meets Shankarayya near a temple where he is staying as a beggar. She asks him to go home. Read the full update here 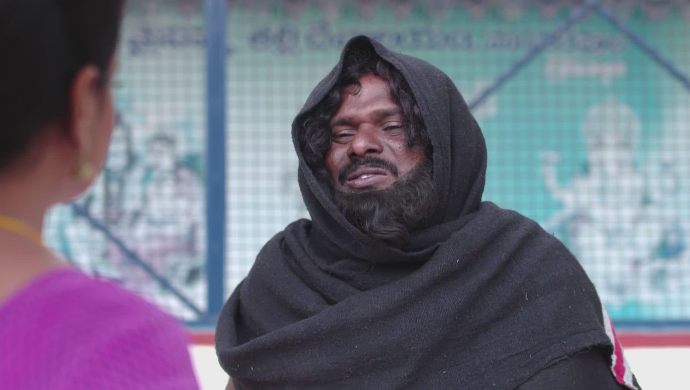 Earlier, in Attarintlo Akka Chellellu, Hamsa helps Dharani and Shivudu to prepare Aditya for their shobanam night. Dharani tries to tell Hamsa to delay the ceremony but Hamsa tells her that it needs to be done at the earliest. Once done, they can tackle all their issues together. Shivudu asks Aditya to tell his love story and finds out that they are the couple who Saiydamma has been looking for. He calls Saiydamma and tells her that he will bring the girl to her. In the meantime, Hamsa sends Aditya into the room and asks him to lock the door.

In today’s episode, Dharani stops Aditya from inching any closer and asks him why is it necessary. Aditya is puzzled. He asks why she had dressed up if she didn’t want to take it ahead. Dharani blames Hamsa and Aditya explains that he believed she was ready so he said yes, too. That’s when they hear Hamsa crying and open the door to see what happened. Shivudu bleeds from his forehead and Hamsa tries to process the situation.

Aditya and Dharani step outside to get some clarity and find Hamsa and Shivudu in the lawn. Dharani tells Aditya to tie the bandana to stop the bleeding and asks Hamsa to sprinkle some water on Shivudu’s face. Shivudu gains consciousness and explains that he will be alright and they should go back inside. He scolds Hamsa for creating a ruckus and disturbing them on their shobhanam night. Aditya and Dharani suggest to take him to the hospital.

Shivudu thinks to himself that hitting himself with a rod wasn’t a big deal. If needed, he would even kill Aditya to take Dharani, as a virgin, and present her to his sister, Saiydamma. The next morning, Saiydamma, Mallesh and Yadagiri are celebrating this news. Saiydamma even offers to consume alcohol along with the boys and enjoys the feeling. Dharani returns from a temple and finds Shankarayya amongst the other beggars.

She asks him what he was doing there. Shankarayya tells her that his mother tortured him and is still finding ways to get them married. Dharani believes and explains that no one can touch her or take apart Aditya and her. She tells him that he need not worry anymore and must return home because Saiydamma must have been worried for him. Shankarayya tries to explain that his mother will not change so soon and if return home, she will do the same old things. But Dharani asks him to go home if he had any respect for her.

Vedavati carries out her morning pooja and thanks the goddess for giving her Shravani as their daughter-in-law. She then asks the goddess to send her son, Aditya, to her safely. But the deepam goes off and Vedavati starts panicking. Vayuputra blames the breeze and asks her to carry on. Next, Vedavati light camphor in the Aarti plate and as soon as she asks about Aditya’s safety, it goes off again. Vayuputra tries to console her by reminding what the Kalabhairava baba told them about Aditya and tells not to worry.

Mallesh and Yadagiri ask Saiydamma what will she do with Dharani if they don’t get hold of Shankarayya. She gets angry and tells them that he will come back home too. Mallesh tells her that it’s difficult to find someone who is purposely hiding and that’s when Shankarayya calls out to his mother. She brings the Aarti plate to welcome him and promises his wedding with Dharani. Shankarayya cusses his mother and decided to leave again but the boys get a hold of her.

Try Out This Anu Emmanuel Look For Your Saturday Night Party

Saiydamma tells Shankarayya that either he will marry Dharani and restore her societal respect or she will die. She points out to the Aarti plate and the funeral bed. Saiydamma warns Shankarayya that the options are kept ready and he has to chose. Shravani finds Godawari lost in thoughts and asks why she was so worried, rudely. Godawari pleads her to tell about Dharani’s whereabouts. She wants to meet her daughter only once. Because the nightmares have been constant and it feels like something bad in coming along Dharani’s way.

Ninne Pelladatha: Here's What Happened On The Day Of Bharati's Odibiyyam Function