In the latest episode of Attarintlo Akka Chellellu, Priyamvada meets Vayupuytra and threatens him to give her the pettanam. Read the full update here. 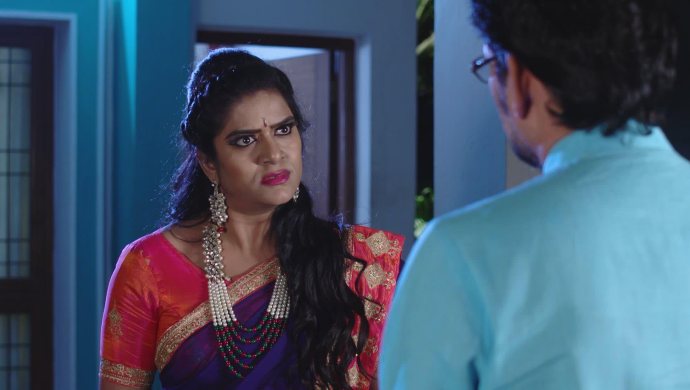 Earlier in Attarintlo Akka Chellellu, when Vedavati and Shravani lose hope and trust in Dharani, she asks them the right questions. She also asks them to think about it and promises that they will find all their answers in it. Priyamvada starts talking again, finds a way to win the Pettanam. Vedavati questions Vayuputra’s intention behind handing it over to Priyamvada. Hamsa tells Dharani about all of Priyamvada’s plans.

In the latest episode, Vayuputra tells Vedavati that she shouldn’t have hidden Dharani’s mistakes from him. He tells her that Priyamvada speaks brashly, but can handle the home well. Vedavati is taken aback, but refuses from asking for any further clarification. Vayuputra goes into flashback, where Priyamvada tells him about the things that Dharani had allegedly done and threatens him to hand over the pettanam to her.

Vayuputra tries resisting, but Priyamvada digs out the same old topic and tells him that she will reveal about her parents’ extra-marital relationship to the world. That night, Vedavati thinks how there is a different man inside the man she married. Vayuputra, too, sobs silently as he struggles between speaking the truth and staying true to his father’s last wish.

Priyamvada comes to Dharani’s room and asks her to leave the house, now that nobody trusts her. Dharani back answers and tells Priyamvada that only time will tell who will stay. Hamsa turns to Dharani and asks her to cry her heart out, since she had been keeping a strong face throughout. Dharani gives her hope and asks her to stay happy. Later, Dharani goes into her room and sees Aditya asking the same question in sleep. She holds his feet and cries.