In today's episode, Shravani waits for her parents to get home & tells them about Vikram, his family and the proposal. Read the full update here. 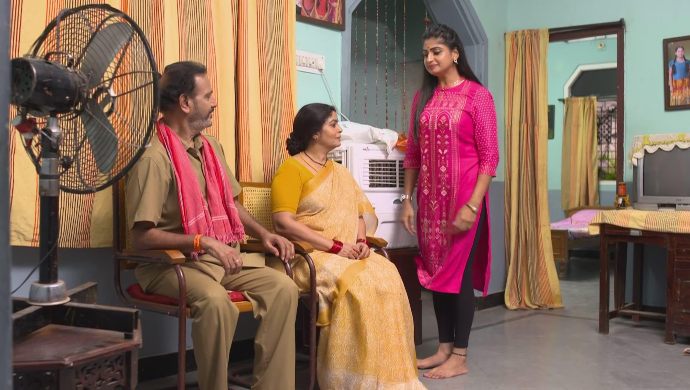 Earlier, in Attarintlo Akka Chellellu, Priyamvada faints after looking and Dharani and Shravani. Vikram hides the family photograph when Vedavati tells him to tell the truth. Priyamvada sides with Vikram and convinces them that they mustn’t tell Shravani anything about Aditya yet. Internally, Priyamvada plans on using this secret to her advantage in kicking Shravani out of the house. Hamsa and Shivudu decide to give Dharani and Aditya a push in consummating their wedding. Shravani comes back home and wishes to own all of Vikram’s wealth one day.

Vedavati asks her husband to get pictures of the new couple through Shivudu but Priyamvada stops them. Vedavati tells that she was hoping for Aditya to come back and leaves. Priyamvada thinks to herself that she will not leave before chopping the family into tiny pieces. Hamsa gets Dharani all dressed up in the evening but she looks terrified. Hamsa asks why she was so scared and Dharani expresses her concern that their wedding isn’t like everyone else’s. But Hamsa tells her that it’s important for them to unite.

Shivudu helps Aditya wear a Pancha and Aditya asks what the occasion was. Shivudu slaps his forehead and thinks that he will have to teach him everything. Dharani tells Hamsa that she has to take Aditya back to her mother and once they seek everyone else’s blessing, they can move ahead. But Hamsa tells her that once they have a baby, every problem will be over. Shravani keeps waiting for her parents and they finally come. Shravani asks them to sit and goes into the room to bring something.

She comes back and asks them to raise their hands, and she keeps the golden bangles in their hands. Narayana asks who gave it to her and she tells them that if they agree, the ones who gave her the bangles will be her in-laws. Then Shravani also clarifies that it’s not a love marriage but a rich and well-known family want her to be their daughter-in-law. Because they are impressed by her and her way of life. Shravani tells them that she will only take this ahead if they agree to it.

Narayana tells Shravani to go ahead and not mention about Dharani to anyone. He also tells his wife to forget that she has another daughter. Godawari tries to defend but as usual, no one pays any heed to her. At the dinner table, Priyamvada keeps thinking about the twins. Vayuputra asks what thoughts are keeping her busy but she dismisses it. Priyamvada thinks that it’s better to ask Vikram in order to get more details. She asks where she lives, who lives in her family if she has any siblings and more. Vedavati tells her to calm down.

Priyamvada tells Vedavati how can they dismiss such important things just like that. Vayuputra too tells her that the girl and she likes Vikram. They do not need to think about anything else or anyone else. Priyamvada thinks to herself that no one would be able to eat if they found about the twins. Shivudu asks Aditya to narrate his love story and Aditya tells him that there is no love story. It’s just a sad story. Shivudu says that then he must know about it.

Try Out This Anu Emmanuel Look For Your Saturday Night Party