In the latest episode of Attarintlo Akka Chellellu, unable to bear the weight, Vedavati reveals about Aditya to Shravani. Read the full update here 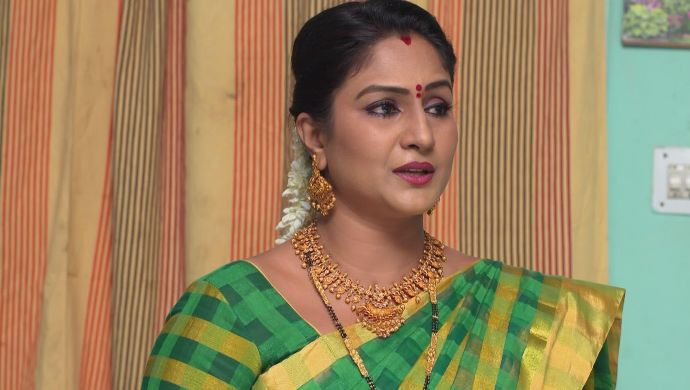 Earlier in Attarinlo Akka Chellellu, Aditya tells Vedavati that he does not like his mother when she compliments the women behind him. Dharani sees that Aditya’s passenger is acting bossy around him and goes to save him. Aditya is surprised to see her fight. She tells him that fighting unnecessarily is wrong but standing up for oneself is important. Shravani comes back home from the temple and goes to the kitchen to make dosas for herself. Vedavati and Vikram make an unannounced visit to their house and Vedavati is impressed to see her.

In today’s episode, Vedavati informs Shravani that she has come to apologise to Godawari and Narayana. Godawari is surprised to hear this. Vedavati tells her that they have another son and they hid this matter previously and need their apology. Vevadavati tells her that he loved a girl and eloped with her. Godawari thanks her for sharing and tells them that she is happy for her. Because most people have to carry the weight for a long time. Neither can they live with it and nor does it go away.

Shravani tells Vedavati that they didn’t have to come all the way home to talk about this. Vedavati tells her that she feels lighter and better now that the truth is out there. She tells Shravani that she does not want any such thing to happen in their relationship. Shravani notoriously tells Vedavati that Vikram took a long time to confess his feeling, he surely wouldn’t have the guts to elope with her. Shravani runs outside and Vikram follows her. She asks him why he had not told her about it.

Similarly, Dharani and Aditya have the same conversation. Dharani tells Aditya to never make a decision without telling her first. Aditya agrees to do that and asks her to serve lunch to him since he has to get back to work. Once Aditya leaves, Dharani starts to wonder the stark difference in what Priyamvada talked and what she saw Vedavati doing. Vikram tells Shravani that felt it would be wrong to burden her with his problems and hence, chose to remain silent. He asks for leave too since he had to go back to the office.

Shivudu sees Dharani pacing in their lawn and wonders why she was at home. He asks Dharaini the same and then also enquires about Aditya’s whereabouts. When he finds out that his path is clear, he tells her to come along with him and assist him in picking the right earring for Hamsa as a gift. Dharani agrees to go along with him and help him. Shravani sees Godawari with a sad face and when she asks what was wrong, Godawari tells her that she too wants to be emancipated from this burden.

Narayana walks inside the house to see them fighting. Before he could go on and on, Godawari asks him to understand what happened earlier. Shravani explains everything and Godawari tells him that she cannot live like that and wants to reveal the truth. Narayana agrees but also tells her that he will talk about it when the time is right. Dharani asks Shivudu why they were going on the other side when the jeweller shops were on the other. Shivudu manages by telling her that his friend owns a small shop ahead on that lane but fears what she would do next since she knows Saiyadamma’s house.