In the latest episode of Attarintlo Akka Chellellu, Priyamvada talks about her daughter who has gone missing. Read the full written update here 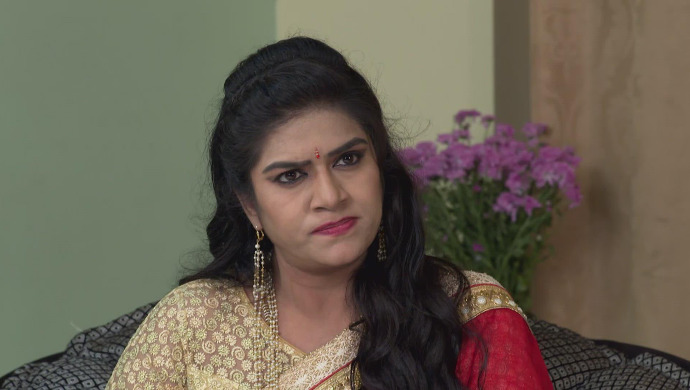 Earlier in Attarintlo Akka Chellellu, Dharani and Hamsa try to boast about how Dharani will have a say in the matters of the house now on. She says that she has to become the No 1 Kodalu. Shravani assumes that she overheard the conversation and found out about Dharani’s plans. However, Dharani says what she says because she wanted Shravani to hear it and be motivated to wake up early and oblige to Vedavati’s religious sentiments. Shravani does as expected. The lawyer goes back to Shashikala and tells her everything that happened. She gets annoyed by his failures and decides to lock him up. The next morning, Dharani waits for her sister to show up and then walks behind her to the pooja. Vayuputra and Vedavati try to guess who is who.

In today’s episode, Vedavati talks to her husband, Vayuputra, about the confusion between Shravani and Dharani  that they (the couple) have to tackle. Godawari offers to help, but Vedavati asks her to allow them to try and understand their daughters-in-law and clear the confusion eventually. To this, Godawari smiles and decides to let it go. The priest asks the two couples to seek blessings from their parents as well as  their in-laws. Shravani and Vikram go first. She touches Vedavati and Vayuputra’s feet but feels obligated to touch her parents’ feet.Next, Dharani and Aditya seek blessings from Godawari and Narayana.

Purposely, Dharani stands across Narayana and touches him. To her (Dharani) surprise, her father showers the Akshantalu upon them with a smile on his face.She feels extremely happy and then, they move her to in-laws. Once the couples are done with this, they go and take their respective  places. The priest tells Vedavati that she could handover any responsibilities to her daughters-in-law and holds out the house keys. The mother-in-law steps ahead and takes the keys. While doing so, she mentions that she does not need to handover her responsibilities to them as they know everything well.

Priyamvada is enraged to see them happy and decides to meet Shashikala instead. There, the two ladies end up fighting and blame each other for their failures. Finally, they decide to let go of the past and focus on how to acquire two things – Vayuputra’s property and ensure his downfall. Priyamvada talks about how she could have solved the problem by marrying her daughter to Vikram or Aditya. When Shashikala enquires why she couldn’t achieve this, Priyamvada tells that  she believed someone to be her daughter only to find out that it was not the case in reality. Priyamvada goes on to explain that she has a long history and that it’s a story for another time, when they discuss the situation about her daughter/s.

Shashikala suggests that she continue the hunt for her real daughter and marry her to one of the boys after she comes back. Priyamvada is puzzled to hear this and wonders how she can marry off a married person for the second time. Shashikala, who also happens to be her husband’s second-wife, puts it across slyly and says that if Priyamvada wants, she could stop the current couples from consummating their marriage. This gives  Priyamvada a different perspective altogether and she decides to give it a thought. On the other hand, Shravani wonders if Dharani was lying about the housekeys and judges herself for believing Dharani’s words.

Hamsa sees Shravani deep in her thoughts and asks Dharani why she did not get the keys. That’s when Dharani reveals that it was her husband who lied to her so that she (Dharani) woke up on time and sat for the pooja. She adds that he enjoys  playing pranks on her. Shashikala calls the lawyer outside and asks him if he knows anything about Priyamvada. Or sif she has ever mentioned anything about her daughter. Upon hearing this, the lawyer is shocked to learn that she is married. However, he does reveal that Priyamvada once visited a jail to meet somebody. We then see a prisoner no. 808 and a jailer with scars on his face.