In today's episode, Godavari gets annoyed by Narayana's anger towards Dharani and scolds him, along with Shravani. Read the full update here. 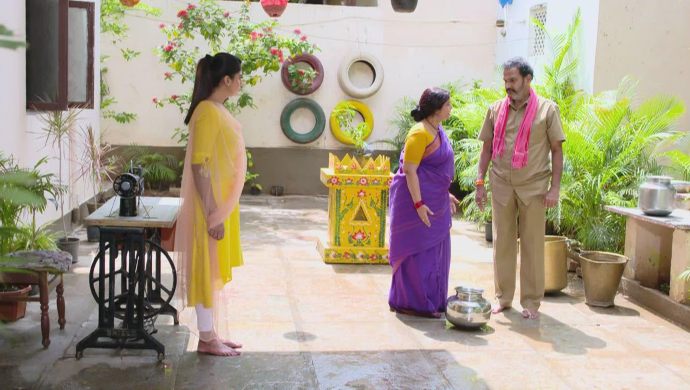 In the last episode of Attarintlo Akka Chellellu, Aditya and Dharani step out to shop for themselves. Dharani buys Aditya a shirt and he buys shoes for her. Vedavati goes to Aditya’s bedroom and reminisces about the old days. Dharani tries to help Narayana at the shoe shop where she’s working, but he accuses her of ruining his life and walks away. Shravani gazes at the soap bar that Vikram once gave her. Godavari finds it and wonders if it can be used for the body or for clothes.

Shravani sees the soap bar in her mother’s hand and asks her what she was doing there. They argue about the soap and its worth, which Shravani alleges that her mother would never understand. Godavari taunts her by saying that Shravani only cares about material things while her daughter Dharani cares for human beings. She steps out of the room and hears Narayana coming home. Because of habit and also by mistake, Godavari calls out Dharani’s name to offer water to Narayana. But he stops midway and asks his wife why she wouldn’t let him forget the ugly past and move on.

Godavari asks him what is wrong and he tells her about the meeting with Dharani earlier in the day. Godavari asks if she was happy and alright and this concern irks Narayana even more. He thinks of a way to convey the message that Dharani is dead for him. So he steps out to pour water all over himself — a gesture of returning from one’s funeral. But Godavari angrily asks him to stop that moment itself. She says that even if one drop of water falls on him, that would mean her death. Shravani tries to counter, but Godavari silences her up by telling her to think before speaking. This puts Shravani in a fix and she decides that she will not let Dharani stay happy and give her away to Shankarayya.

Vedavati goes to an agency to publish an advertisement about Aditya going missing. But the man makes her realise that by print advertisements, he would come to know sooner. Vedavati apologises and says she is in stress and unable to think, and leaves. Aditya keeps asking what is wrong with Dharani and after insisting for some time, she taunts him about not saving any money. Aditya does not understand the sarcasm and feels alright about spending. She asks him where he wants to go next and what he wants to do going forward. But Aditya has no clue, he tells her that he will be okay with whatever she decides.

That’s when he spots Shivudu on the other side of the road. Shivudu is the man who helped Aditya get the painting job. Shivudu sees Dharani and tells her how Aditya kept talking about her while working. Aditya asks for another job like that and higher pay. Shivudu asks if they need help and offers to show them a place to live next to his house. They go there and as soon as Shivudu calls out to his wife, Hamsa, she starts throwing utensils. Aditya thinks of it as a game and asks to try it but Dharani stops him.