In today's episode, Priyamvada sees Dharani behind Aditya and Shravani next to Vikram. This boggles her and she faints. Read the full update here 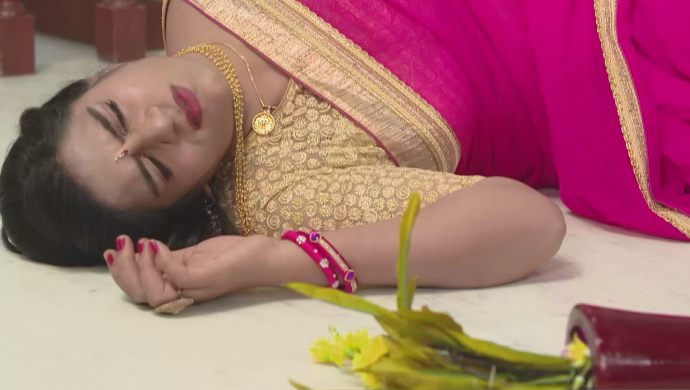 Earlier, in Attarintlo Akka Chellellu, Priyamvada slaps her maid and another lady because she thinks they disrespect her. Vedavati welcomes Shravani and they all laugh about Vikram’s funny stories. Shravani thinks of the wealth that her future family has and sits on the sofa like a queen. Vikram shows her around the house and Priyamvada tries to spy on them. Aditya calls Priyamvada just for fun and the latter tells him to video call her.

In today’s episode, Priyamvada talks to Aditya on a video call and asks him to be prepared for a shock. She thinks that Aditya will see his wife here and in a fit of rage, come home to bash his elder brother, Vikram. But she sees Dharani behind Aditya and Shravani next to Vikram. Priyamvada is unable to comprehend what she saw and ends up fainting. Vayuputra and Vedavati see her, just in time, and help her. Once she gains consciousness, Priyamvada keeps repeating Aditya’s name and says “two of them”.

Vayuputra thinks that she is worried about Aditya and asks her to go to her room and take some rest. Shravani and Vikram land in his room finally. Vikram asks Shravani if she is willing to marry him, then he adds that his parents have already made their minds. But he needs her answer. Shravani gives a wide smile and tells him that she wouldn’t have come home if her answer was no. Next, Vikram asks Shravani to go downstairs and he goes back to the room to remove the family photo from his room.

Vedavati goes into the room asks why Vikram was taking it off. He tells his mother that maybe telling Shravani about Aditya and everything happened, isn’t the best idea. Vedavati tells him that he should be truthful but Priyamvada butts in to manipulate them into believing that telling her about Aditya yet. Vedavati leaves them to decide for themselves, Vayuputra and Vikram exit the room behind her. Priyamvada thinks that she will use this fact to play with Vikram’s girlfriend.

Everyone meets downstairs, in the living room, and Vedavati applies vermilion on her forehead and gives her a new saree and gold bangles. Shravani accepts it happily and bids goodbye to them. Shivudu comes homes and brings a big basket of flowers. Hamsa asks what the special occasion was and he tells her that since Aditya and Dharani haven’t consummated their wedding, he checked with the priest and decided that they must help them take the step ahead.

EXCLUSIVE: Varun Tej And Valmiki Director Harish Shankar Have A Blast On…

Kalyana Vaibhogam: 5 Things About Swaroopa That Prove She Will Always Be A Step…

Hamsa thinks that maybe it is inappropriate. But Shivudu believes that they left their families for each other and have no one else, other than the two of them. Shivudu tells Hamsa that he will talk to Aditya and she will have to talk to Dharani. Hamsa agrees and leaves to decorate their room with the flowers. Shivudu gets a call from Mallesh who tells him that he has sent the picture of Shankarayya’s bride on WhatsApp. Shivudu asks him to leave all worries and checks his phone. However, he is unable to download the photo.

Shravani comes back home to see the door locked. She cribs about her situation and wonders how long she will have to stay outside. Her next-door neighbour comes to her doorstep and tells Shravani that her mother has gone out and gives her the keys. Shravani thanks her and the lady adds that her mother has also asked her to cook rice. Shravani goes inside the house and cribs about cooking rice. She closes the door and wears the saree. While appreciating what she has, Shravani thinks that one day she must own all of their wealth.