The matters begin to get worse in this hit Telugu TV show. Aditya returns to meet Dharani. Shravani fails to threaten the goons. 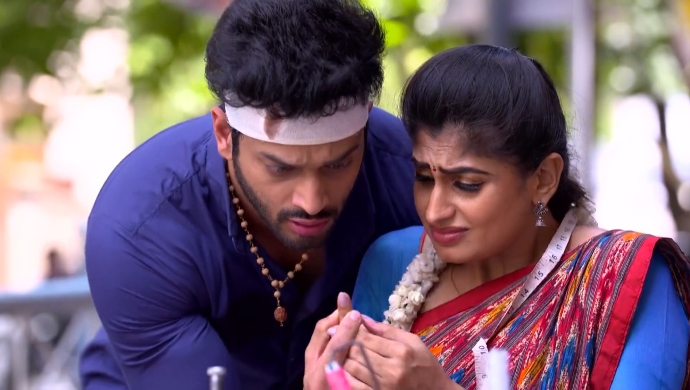 In the Telugu TV show Attaritlo Akka Chellellu, things have been going for a toss in everyone’s life. Dharani has been keeping her feelings to herself. Shravani has been losing control over others. The money-lenders have stationed themselves in their house. Aditya, on the other hand, has been unable to control his feelings for Dharani. Vikram almost showed Shravani’s picture but stopped midway, for the bigger good.

In today’s episode, the lady don who has come to take money from Narayana continues to demean him and his family. Shravani tries to boss over her but fails. Dharani tries to make her understand softly but her efforts go in vain. Her mother asks her to go to the shop and continue with her work since staying home in front of these goons would do no help. Just as she begins her work, she sees Aditya walk into her shop and he greets her.

Aditya thanks her for admitting him in the hospital and for donating blood to him. He even tells her that he has promised his mother about forgetting Dharani entirely but has been failing. Aditya demonstrates his technique of trying to forget her and extends his wrist. He explains what Vikram told him about quitting addictions. He asks his ‘tailor’ to continue her work while he confirms that he’ll only be around her but will not disturb.

The goons play a game of cards and Narayana and his wife are crying over their poverty and bad fate. Dharani’s mother tells her husband that there are two girls of age and the men outside have been eyeing them. Narayana tells the lady don that there is no way he could gather funds to pay off her loan. She tells him that he has been able to get a loan when he wanted money for his daughters’ education and their weddings. She hints that he could get a loan even now. They tell the lady don to give them a few days time at least.

In the shop, Dharani sees Aditya becoming restless and continuing to hurt himself with the rubber band on his wrist. She ends up injuring herself while sewing. Aditya sees this and rushes to her. He cleans the blood off her finger and takes care of her. That’s when the flashes of their night in the jungle come to Dharani’s mind. Now he is taking care of her like she had done it that night. Stay tuned to know what happens next.

Watch The Story Of Arjun, The Man Who Almost Made In, In Jersey ft. Nani On ZEE5

Maate Mantramu 20 June 2019 Preview: Vamsi and Vasundhara Meet Each Other