In the latest episode of Attarintlo Akka Chellellu, Aditya brings a glass of fruit juice for Dharani to impress her, & prove his love. Read more here 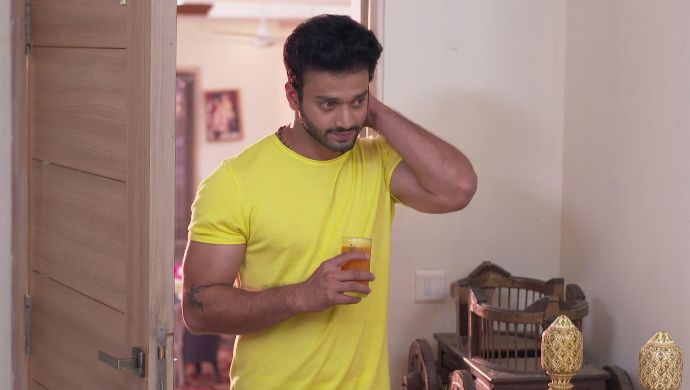 Earlier in Attarintlo Akka Chellellu, when Priyamvada tries to defend herself, Dharani and Shravani try to tell everyone otherwise. Dharani claims that the cut on her palm looks unusual and might not have been an attack. Shravani says that they cannot take the case ahead until and unless they find proper evidence. Aditya gives company to Priyamvada because she claims to be scared on her own. That night, Dharani overhears Priyamvada and Vayuputra’s conversation about a certain man, from the jail. The next day, Dharani goes to jail along with Hamsa and F2. She finds out that Shobhan Raju is Priyamvada’s husband. Shobhan Raju tries to see the ‘pretty girl’ looking for him, but misses the opportunity.

In today’s episode, Dharani comes home and keeps thinking of ways to find out more details about Shobhan Raju. Aditya sees her and asks where she had gone. Dharani informs that she went to meet her friend, along with Hamsa. Aditya tells Dharani that her ‘Maa Ji’ is searching for her. Dharani is puzzled to hear this and asks for clarity. Aditya explains that his mother, who Dharani called Maa Ji at one point, is searching for her. Dharani laughs it off and says that she assumed that Aditya was speaking about ‘Mata Ji’. Dharani realises her mistake and tries to cover up, but Aditya gets intrusive and asks for details.

Dharani says that she met Mata Ji because she didn’t have the one thing that’s most important in a marriage, which is love. And to solve that problem, she sought Mata Ji’s help. Aditya wonders why Dharani would assume that he does not love her. Then, he wonders if Mata Ji believed Dharani’s side of the story. He decides to get some clarity over the matter and calls Mata Ji. After the initial greetings, Aditya asks Mata Ji if she believed that he did not love his wife. Dharani, who was folding clothes in her room, picks up the call and talks to Aditya like Mata Ji. She tells him that he needs to express his love for her.

Aditya thinks about what Mata Ji said to him. He agrees that Dharani would not be able to see his love if he keeps scolding or avoiding her. That’s when Aditya decides to express his love and takes a glass of fruit juice for Dharani. However, he freezes right after entering their bedroom. Aditya has no clue of how to approach his wife and stands at the door. Dharani sees him and asks if he needs any help, Aditya nods to say no. She turns back to do her work and starts giggling. This infuriates Aditya and he asks for the reason behind her giggling.

Dharani tells him that he looks like a newlywed bride, who is entering into the bedroom before their first night. Aditya gets upset on hearing this and Dharani ends up pampering him until he feels alright. They decide to share the fruit juice. Vedavati sees Vikram working and asks about the emergency. Vikram explains that they cannot lose focus because Shashikala is still trying to get her hands on their business. He talks about the day when she found a way to get Aditya’s signatures. When Vayuputra says that she cannot do anything, Vikram adds that Shashikala isn’t alone. An insider is helping her.

Priyamvada overhears their conversation when Vayuputra tells Vikram to avoid blaming Priyamvada for everything. She goes out and calls Shashikala to inform about their conversation. Once again, Shashikala emphasises that Priyamvada needs to mix the liquid given by her, in her nephews’ drinks. Priyamvada is tired of it and asks if it poisonous enough to kill them. Shashikala slyly tells her that it wouldn’t kill them, but it will definitely make lives hell.