In the latest episode of Attarintlo Akka Chellellu, Dharani tells Hamsa to be carefree because she saved Shivudu from them. Read the full update here. 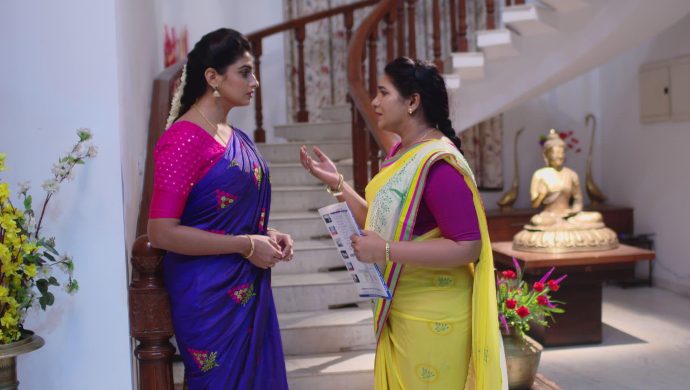 Earlier in Attarintlo Akka Chellellu, Vedavati and Vayuputra find out what happened along with Shravani, through Priyamvada, who tells them to stop trusting her. F2 and Dharani ask if they can distribute the rest of the pressure cookers to the other members of their gang, and Dharani goes inside to save Shivudu. At home, Dharani understands the reason behind Hamsa’s sadness but wonders what was wrong with others. That’s when Shravani scolds her.

In the latest episode, Vikram expresses his disappointment in Dharani and walks away. Vedavati, Vayuputra and Shravani talk to her disapprovingly and walk away. Priyamvada, however, tries to see something more but is left disappointed. When everyone goes away, Hamsa wonders why Dharani wasn’t speaking up for herself and questioning things. But soon, Dharani comes up to her with a smile on her face and tells to be carefree. Hamsa looks at her, puzzled.

Dharani explains that she has rescued Shivudu, and he is in the hospital getting his treatment. Hamsa asks Dharani about the reason behind her silence. That’s when Dharani explains that she could speak up and bring Priyamvada’s true side out in the open. But doing that would cause more damage. Because Priyamvada knows some secret about Vayuputra, which when revealed could shatter the entire family.

Shashikala scolds her henchmen for being useless. Priyamvada complains to Shobhan Raju. He tells her that Dharani has a strong reason behind not speaking up, but asks him to focus on Aditya’s medicines. Priyamvada sees Dharani standing in the balcony and goes to add fuel to the fire. But Dharani tells Priyamvada to stay within her limits and wait for the day when tables turn.

Women's Day Special: 10 On-Screen Ladies Who Were The Face of Strength And Dignity