In the latest episode of Attarintlo Akka Chellellu, Priyamvada wants to own all that is written on Aditya's name. Read the full update here 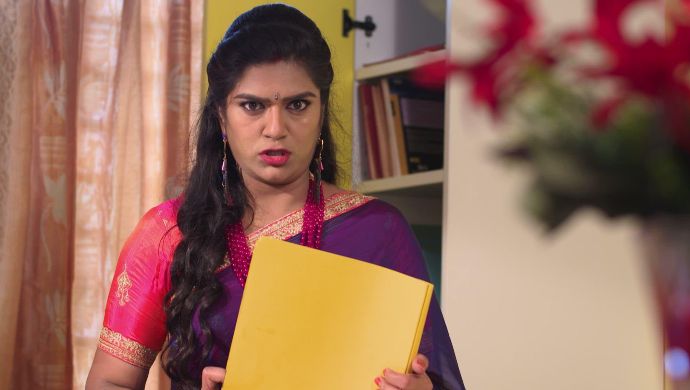 Earlier in Attarinlo Akka Chellellu, Dharani tells Aditya that she will call him ‘Sir’ now on. She sees him happy and pushes him to have a bath. Saiydamma brings a saree for Shivudu and insults him for being emasculated. Shivudu is offended and arrange for a set up to kidnap Dharani, by hook or by crook. They get the perfect moment to bring her to Saiydamma. But once they untie her, Shravani slaps Shivudu and scolds  Saiydamma for being useless once again.

In today’s episode, Shivudu picks up a rock and holds it over his head, in a motion to throw it on Saiydamma. But he stops and tells her that he wouldn’t know about the twin-situation unless she told him. Saiydamma stops and thinks, she apologises to Shivudu for being so furious and ignoring the important details. She then tells Shivudu about Shravani. Shankarayya is annoyed of their petty behaviour and leaves them. Dharani sees Priyamvada driving towards her house and reminds herself to be cautious of her.

Vedavati and Vikram sit inside the office conference room. Vedavati seems anxious and asks the office boy about the number of interviewees who had come. Vikram stops her from going out and tells her to stay calm. He assures her that Aditya’s wife will turn up for the job as she fits the bill perfectly and this tailoring job is meant for girls like her. In the meantime, a girl tells her brother to check on their cab. Because if she is late, she could lose her job.

Aditya arrives with his cab and affirms the brother by referring to the girl as his sister too and says that he will drop their sister safely. Vikram and Vedavati start interviewing girls one after the other. Priyamvada finds some time alone in the house. She decides to scan through the house and find out documents that are related to any property named on Aditya. She wants to lure Aditya and transfer the property to her name. Priyamvada finds one file and is happy to see the amount of money that he owns. She hides the file in the garage.

The girl in Aditya’s cab thanks him for referring to her as his sister. Aditya asks where she was headed for the interview. She tells him that it’s Vikram Aditya Group of Companies. Aditya tells her that the MD is strict but a good person and there will be a lot of value to her work there. Aditya wishes her the best, she thanks him and steps out. But soon, she finds out that her certificates are left in the cab. Anyhow, she goes inside and greets them. She also tells them about her lost certificates.

Vikram expresses his concern about her not having the certificates. But the girl tells her that she believes that the cab driver will bring them back to her. She starts talking about herself in the office when Aditya sees the file behind. He turns back his cab and goes towards the office. Dharani and Shivudu are at the same crossroad. But the moment, Shivudu reaches closer to Dharani, she turns towards the street vendor and Shivudu misses to see her. Dharani buys a shirt for Aditya but has mixed emotions.

She wonders if she is lucky to have a man who left his luxuries for her or she must be sad because he is losing out on so much just because of her. Aditya stops his cab outside the office but second-guesses if he should go inside. He finds a way to go and that is by wearing a monkey cap. He calls Dharani and explains the situation to her.