In the latest episode of Attarintlo Akka Chellellu, Shankarayya tells Dharani about Shravani and she informs others. Read the full update here. 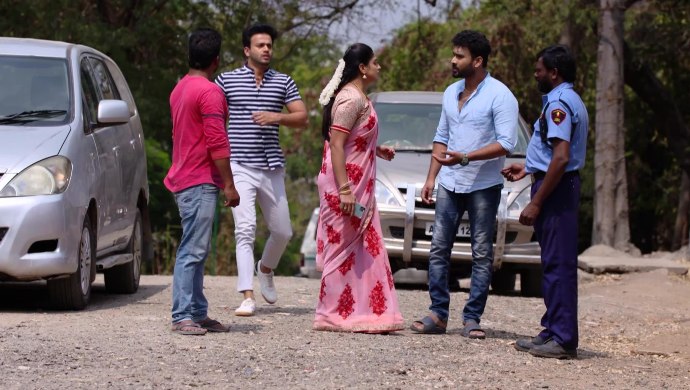 Earlier in Attarintlo Akka Chellellu, Vikram gives into Shravani’s bet only five seconds before the times goes off and loses it. Dharani meets the builder to sell the house given to her parents. Aditya’s excitement for his first night scares Priyamvada, who asks for Shobhan Raju’s help. He decides to kidnap Shravani by manipulating her driver. Shankarayya sees this and fails to help her.

In today’s episode, Shankarayya gains consciousness again when Dharani stops her car to see him. He tells Dharani about everything that happened. Vikram gets a call from Shobhan Raju, posing to be the kidnapper, and he asks for Rs. 2 cr as ransom. Vikram wonders how he could collect the cash in a short span of time. Dharani reminds him that they can save Shravani by finding out her location from the app that Shravani uses to track Vikram’s location.

Shobhan Raju saves the day for Priyamvada by telling her that Aditya-Dharani’s first night has been cancelled. Shravani gains consciousness and sees her condition. Shravani sees a piece of glass nearby on the floor and she tries to collect it with her feet. Finally, she gets it and cuts the rope tied to her hands. That’s when one of the ruffians comes to check on her, and she pretends to be asleep again. Shravani gets up and walks outwards when she touches an unsteady tire and it makes a thud.

From Dates To Panchangam, Here’s Everything That You Need To Know About…

Wow Wednesday: Meet The Real Side Of Madhumitha AKA Our Chirpy Sarsu From No 1…