In today's episode, Chamundi comes home with Vedavati's gifts and gets into an argument with Shravani. Aditya hopes Dharani's wedding is called off. 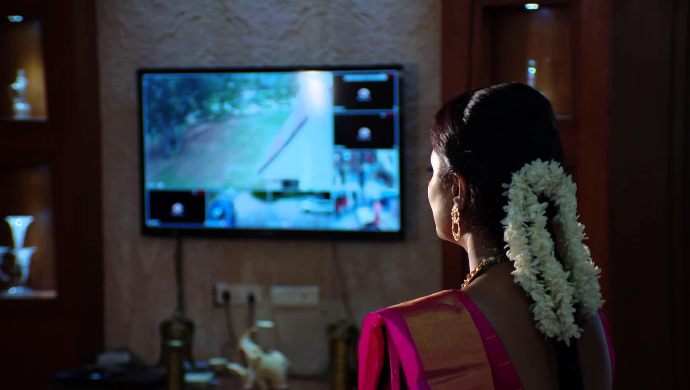 In the previous episode of Attarintlo Akka Chellellu, Dharani manages to tackle all obstacles and is not seen by anyone other than Aditya. She returns home after a long day at work and talks to her mother rudely. However, she keeps a check on her behaviour and leaves. But before heading to bed, she asks her mother about her wedding day.

In today’s episode, Godavari asks Dharani why she is in a rush to get married and whether she really means what she is asking for. Dharani tells her mother how her father and sister are boasting about this wedding. And that she must not expect anything more. Godavari starts scolding Dharani for being so submissive. She talks about how good a husband Aditya would be. Dharani asks her to stop talking and thinking about him. She reminds Godavari that neither Aditya nor she accepted being in love with each other. Dharani tells her to talk to Shravani and Narayana and fix a date and time for the wedding.

The next morning, before leaving for work, Shravani taunts Dharani for staying outside the house for long. When Dharani tells her about the catering order, Shravani suggests that she must tell Chamundi that she is about to become a bride now and her in-laws will not appreciate her working outside the house. Godavari gets into a small argument with Shravani, who once again claims that Dharani will not be able to get anyone better. As they speak, Chamundi steps out of her car with the saree and gifts Vedavati had given to Dharani.

Chamundi says how everyone wanted Dharani to stay back and gives her the gifts. She says that the saree must be easily worth Rs. 25,000 or more. Dharani asks if anyone saw her there. But Chamundi says that they failed to catch a glimpse. But had they seen her, after the delicious food and the soulful song, Vedavati might have made Dharani her daughter-in-law. While this statement shocks Shravani and Narayana, it makes Godavari feel happy. Chamundi compliments Narayana for having a daughter like Dharani.

Shravani tells Chamundi that Dharani will not come to work anymore as she is soon to be married. Chamundi asks her who will pay for the loan instalments. She suggests Shravani come and help her. Obviously, Shravani loses her calm. Chamundi then asks her to be her lawyer for the case that would be filed after she kills a few people. Shravani is speechless. That’s when Chamundi says that they should let Dharani do what she’s doing because nobody else is capable of doing the work. Chamundi warns Shravani against talking about Dharani’s marriage or in-laws since they too, sell samosas on the roadside.

Chamundi challenges Shravani to let Dharani be with her for a few days. She says that for Dharani’s kindness and beauty she’ll get the best of boys for marriage. Not only that, but she will also earn loads of money. Shravani asks her to stop interfering in their personal issues and stay away. Narayana tells Shravani to calm down and explains to Chamundi that they’ve agreed to this marriage because that’s all they can afford. Chamundi agrees to stay away, informs Dharani about the next catering order and leaves. Furious, Shravani leaves for work, saying that Dharani must get married soon.

Later that day, Aditya keeps watching the CCTV footage to take a look at Dharani. He thinks and prays that Dharani’s wedding with Shankarayya is stopped. That’s when Vedavati brings in a glass of milk for Aditya. She asks him why he’s watching the CCTV footage and sees Dharani on the screen. Thinking it’s Shravani, Vedavati wonders why she didn’t meet or talk to her. Aditya thinks it’s best to not ask any further question. Because if she asks about Dharani, Vedavati will know that Aditya hasn’t forgotten his ‘tailor’. Vedavati bids him goodnight and goes back into her room.

There, she tells her husband that their future daughter-in-law had come home but left without greeting them. Her husband tells her that she may be hesitant as Vikram hasn’t told them about their relationship yet. He suggests that they must sit and talk to them together soon. That’s the only cure to this problem.

Check Out Which Of Your Favourite Celebs Took The FaceApp Challenge!

SHOCKING! Will Vamsi Be Alive To Have A Future With Vasundhara, In Maate Mantramu?