In the latest episode of Attarintlo Akka Chellellu, finally, Aditya reveals his identity and meets his mother. Read the full update here 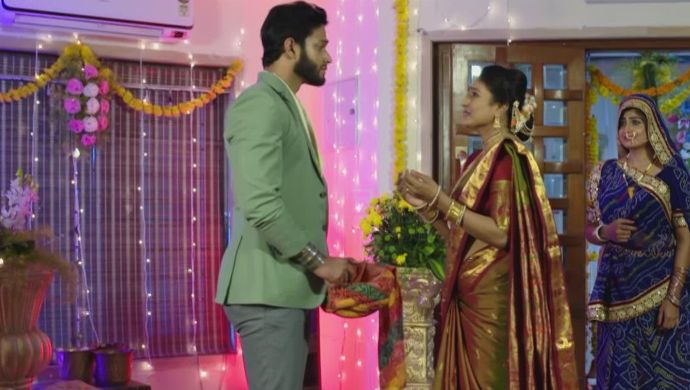 Earlier in Attarintlo Akka Chellellu, Dharani stands in the lawn as Shravani and calls Priyamvada. She manages to misdirect the goons into kidnapping Priyamvada. The lawyer, unaware of this fact, tries to win Shravani by saving her and finds a way to get rid of the goons. 459 km out of Hyderabad, when the car runs out of fuel, the lawyer gets out and opens the trunk to find not Shravani, but Priyamvada tied inside. She kicks him and tells him to find a way to reach in time and stop the wedding. Aditya, on the other hand, helps Vikram in dressing up for the wedding. At a point, Vedavati shares how much she is missing Aditya and everyone in the room starts to tear up.

In today’s episode, Shravani feels offended when Dharani addresses her as Akka, and Godawari, as Amma. She tells the ‘Rajasthani’ girl to stop trying to inch closer to people. In some time, everyone reaches the wedding hall, which is in their lawn itself. Vayuputra compliments Vedavati for this decision and she informs him that this decision, too, is taken by their daughter-in-law. Shravani and Vikram commence the wedding rituals, while Vedavati continues to think about her younger son’s absence at the wedding. She remembers how Dassamma mentioned that her son and daughter-in-law will meet her on the wedding day.

At one point, a guest calls out to his mother and Vedavati assumes that her Nani has called her. She steps aside and goes into her Pooja room. Crying endlessly, Vedavati shares her pain with the goddess. She begs her goddess to either bring her son back to her to take this lifeless life away from her. Vikram asks the Rajasthani boy to bring his mother to the wedding venue since they will need her help in the rituals. Dharani asks him to have some humanity and see the pain that his mother is going through. She takes him to call Vedavati but instead, they all start crying when they hear of Vedavati’s pain.

Three Half Bottles Review: John Kottolly Steals The Show With ‘Gyaan’ In…

When Vedavati talks about death, Aditya extends his hand to help but something holds him back. Aditya musters courage and goes to call her for the wedding. Vedavati refuses to leave her spot unless her son comes to her. With welled up eyes, Aditya claims that her son has arrived, and Vedavati instantly stands up to search for him. Aditya stands still and asks if she hasn’t recognised her son yet, as he takes off the moustache and the turban. Vedavati clings to her son and cries her heart out. She has many questions and Aditya answers them, while still embracing his mother’s love. Finally, she asks him about her daughter-in-law. When she turns around to see who Aditya was pointing at, Vedavati is shocked.

EXCLUSIVE: Here’s An Early Look At The Brides And Grooms Of Attarintlo Akka Chellellu