In today's episode, Vikram is lost for words after Shravani walks towards him while going to meet his parents. Read the full update here 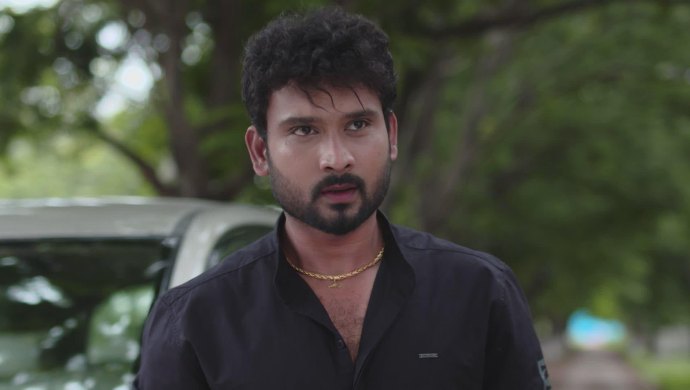 Earlier, in Attaritlo Akka Chellellu, Shravani gets annoyed while speaking to Vedavati and Vayuputra. They are happy for her to come home but miss Aditya. Dharani learns that a group of beggars are in search of Aditya. Aditya thinks that he can walk without the crutches but falls down instantly. Moments later, Dharani, who was walking next to him, slips and Aditya holds her from hitting the ground. Shravani dresses up as Dharani and receives extreme reactions from her parents. F2 brings breakfast for Dharani and Aditya and offers to drop them to the hospital.

In today’s episode, Dharani sees that Mallesh and Yadagiri are standing close by. She gets back inside the autorickshaw and asks F2 to take the vehicle closer to the doctor’s gate. Aditya expresses that he will be able to walk the short distance but Dharani insists F2 to drive ahead. In order to get his vehicle started, F2 dashes his auto into Mallesh’s bike which ends up falling down. Yadagiri and Mallesh come running towards the bike and start arguing. F2 apologises and asks them to let it go.

Mancrush Monday! Nagarjuna To Nani: Treat Yourself To Your Beloved Heroes’…

Inside the auto, Aditya tries to get down to give back to the boys who were bullying F2. But Dharani stops him without telling about Mallesh and Yadagiri. In the same hospital, Shivudu and Saiydamma keep talking about her health and revenge. Shivudu tells her about the new couple who have joined them, and are in the same hospital. Saiydamma asks if Hamsa will come to meet her and Shivudu responds positively.

Vikram waits for Shravani to come so that they could go and meet his parents. Shravani walks in a pink kurta and Vikram is lost at that sight. Shravani snaps her fingers to bring him back to the reality and Vikram starts praising her about how beautiful she looks. As they get into the car, a beggar comes, flashes Aditya’s picture and asks if they have seen him. Both, Vikram and Shravani, decide that they must keep the matter (the siblings’ eloped wedding) a secret until the wedding is over.

Aditya and Dharani go to the doctor. He tells them that Aditya is doing much better now and can stop using the crutches. Dharani tells the doctor to not let him so loose because he might start running. They leave from the doctor’s cabin and meet Shivudu who asks how Aditya is doing. Later, Aditya asks about how sister since he was drunk and sad the previous night. Shivudu asks them to come and meet his sister but Hamsa makes an entry and asks Aditya and Dharani to go back home without meeting her.

Dharani asks Hamsa, after taking her aside, why she refused Shivudu’s offer to meet his sister. Hamsa tells her that Shivudu’s sister has the worst energy ever. She could break a rock with her eyes. Vayuputra recollects all that happened over the last few days and starts to think if the dots actually connect towards Aditya. Vikram asks if Shravani was worried about something. Shravani declines but thinks to herself that Dharani is the only stress to her. Finally, Vayuputra calls Priyamvada to check on the new couple in Shivudu’s land.

7 Signs You Have A Possessive Partner Like Kalyana Vaibhogam's Nithya