In today's episode, Shravani dresses up as Dharani. Godawari is happy to see her but Narayana becomes furious at the sight. Read the full update here. 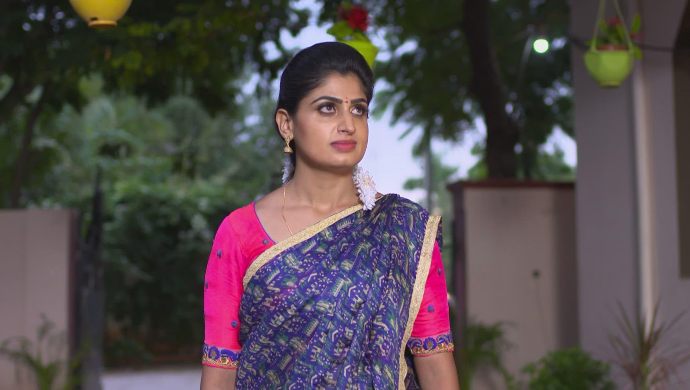 Earlier, in Attaritlo Akka Chellellu, Shivudu is enraged and saddened, at the same time, to know about everything that Saiydamma went through. He promises to avenge her son and bring the girl who left him in front of his sister. That morning, Aditya and Dharani sit in their lawn and Aditya expresses his love by sharing roses. Hamsa comes and playfully teases Aditya, she even pulls his cheeks for fun. But at night, Shivudu comes home drunk and shares what happened to his sister. Dharani and Aditya, who had been overhearing them, think that maybe Shivudu is Saiydamma’s brother. Shravani and Vikram talk on call before hitting the bed.

In today’s episode, Vedavati takes the phone from Vikram and speaks to Shravani. Shravani is frustrated to talk to them but continues to talk softly. After Vedavati, Vayuputra too talks to Shravani. This makes her annoyed but she has no option. Finally, Vikram takes the phone again and goes. Vedavati and Vayuputra talk to each other about how they are ready to bring in happiness but their younger son isn’t a part of it. Vayuputra gives her assurance that Aditya will return for Vikram’s wedding.

The next morning, a beggar gets a call from his fellow mate. They discuss how they need to share the information about Aditya with each other before greedily going to Vedavati. Soon, the beggar ends up at Dharani’s doorstep and Dharani recognises him as the same man who donated blood to Aditya a few days ago. She asks him if he recognised her and the beggar asks how her husband is. Dharani offers him to come inside and meet her husband. In the meantime, the beggar asks if she has seen the boy (Aditya’s picture).

Dharani wonders who has deployed them to find Aditya. The beggar gets another call, which he rejects and tells that ‘this man’ won’t leave him until they find the boy. Dharani thinks if it’s Saiydamma’s men and tells the beggar that her husband has gone for a walk and won’t be home soon and the beggar leaves. Shravani dresses up as Dharani and meets her mother. Godawari has tears and starts crying but soon understands that it’s not Dharani. She is busy taunting her mother when Narayana sees her and thrashes her out of the house.

Shravani and Godawari try to stop her but he does not listen to them. Godawari tells him to stop his act and informs that she is his daughter. Shravani yells at her father and he tames his voice. He asks why she is dressed like that and requests her to change into something better. Then Shravani thinks to herself that if she can’t bear Dharani’s shadow how can she be in her clothes. That’s when she goes to change and make an impression on Vikram’s family.

Dharani and Aditya need to go to the hospital. She asks him to walk carefully and Aditya tries to prove that he can walk without support but ends up falling down. Dharani holds him in time and walks ahead but slips and falls. Thankfully, Aditya holds her. Looking into her eyes, Aditya tells his wife that anyone can fall anytime but what matters is if they have someone to hold on to. In the midst of their romantic moment, F2 returns home. Dharani asks why he had come and he tells them that he brought dosas for them.

F2 even offers to take them to the hospital but Dharani disapproves. Aditya and F2 insist and Dharani agrees to come only if the boys promise not to discuss any business ventures on the way. They agree. Yadagiri tells Mallesh that Saiydamma’s condition is worsening, if they could find Dharani it’ll be of great help. Mallesh tells his friend that they aren’t looking for Dharani to give her away to Shankarayya and Saiydamma. But the moment they find her, he will elope with her.