In today's episode, Dharani feels a panic attack coming when Chamundi asks her to meet Vedavati and the family. Read the full update. 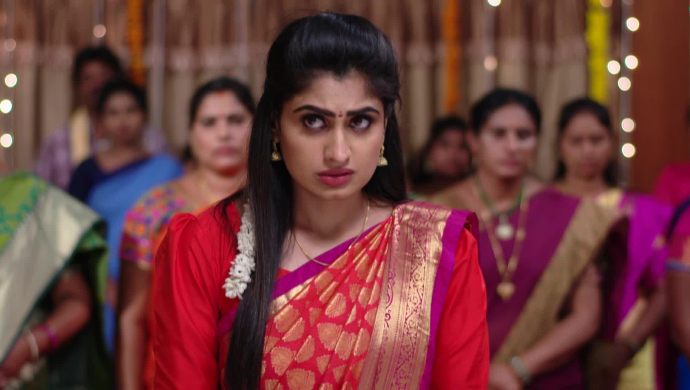 In the previous episode of Attarintlo Akka Chellellu, Dharani was at Vedavati’s house, not because she was invited by her or by Aditya, but as a part of Chamundi’s catering team. Dharani tried her best to avoid Aditya, Vikram or Vedavati. But soon after her day started, she met Aditya near the pool. Eventually, he lost his balance and slipped into the pool, taking Dharani along with him.

In today’s episode, Dharani falls into the pool after Aditya prays for something wholeheartedly. He asks if she is alright and then tells her that he gets whatever he wants. Aditya further adds that he will now pray for Dharani’s wedding with Shankarayya to be cancelled. Dharani tells him that it is impossible because she is praying for the wedding to take place. She stops him from talking any further and leaves. In the meantime, Vedavati’s sister-in-law Priyamvada thinks of how to bring Dharani, who she thinks as Shravani, on track, but one of the maids calls her and they leave to attend the pooja. Dharani is soaking wet outside the pool when Aditya asks her to stop once again. He sees her shiver and offers his towel to her. Dharani feels thankful.

Sometime later, Aditya is standing in the backyard wearing a white and gold dhoti. He sees Dharani walk up to him in a red saree and asks her to wait after the pooja is over because he wants to introduce her to his mother. Dharani wonders why things are going completely opposite of what she wants. Aditya goes back and sits with the family, he asks Vedavati about the reason for a sudden pooja. Vedavati asks Aditya to stay quiet but Vikram tells him that the pooja is for him so that he can forget the ‘tailor’ soon. This puts him in much thought and guilt.

Dharani goes back to her catering staff and Chamundi asks Dharani about the changed saree. She tells her the story and Chamundi tells her to be grateful for the opportunity to feed such a family. Just then, another cook comes and interrupts their conversation. She tells them that the pooja is taking place because the owners’ son fell for a girl who wouldn’t accept his love. After this, she suggests sitting for the pooja since their work was done. Chamundi agrees but Dharani again starts asking for leave and again Chamundi asks her to have some patience. She drags Dharani inside the house and introduces Dharani to Vedavati as the girl who prepared the prasadam for the pooja.

Vedavati is shocked to meet her and asks: “Shravani, when did you come?” Chamundi corrects Vedavati by telling her that she is Dharani, the girl who came along with her catering team. Vedavati thinks of the whole scenario as yet another plan by Vikram and calls out to him. He sees Shravani, who is in fact Dharani, and tries to run away but is caught by his mother. Aditya too sees Dharani and introduces her as his ‘tailor’. Vedavati corrects Aditya by telling him that she is Shravani, a lawyer. But Aditya refuses to agree. Vikram and Aditya both start arguing. Everyone forces Dharani to reveal her identity. But that’s when Dharani snaps out of her dream and the episode ends.