In the latest episode of Attarintlo Akka Chellellu, Vedavati makes a mistake of taking Priyamvada's name as the next head of the clan. Read more here 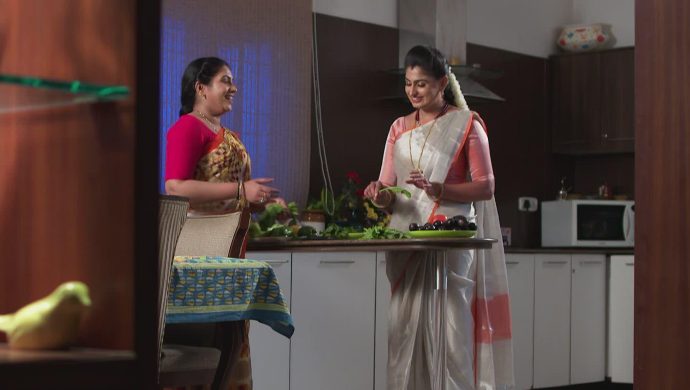 Earlier in Attarintlo Akka Chellellu, Vedavati warns Dharani against going out alone and tells Aditya to always accompany her. Aditya assumes that Dharani thinks of him as a useless person. He decides to teach her driving, so she could drive wherever she wants. However, Dharani is unable to pull down the seat belt and asks for Aditya’s help. She ends up kissing him when he tries to help him. Aditya sees this as a distraction, he gets disinterested and leaves again. Dharani finds Priyamvada peeping into the car and gets down to tell her to mind her own business.

In today’s episode, Priyamvada joins Vayuputra in telling Vedavati that she needs to rest. Vedavati says that it’s time for her to take rest and hand over the authority to Priyamvada. While  Vayuputra is shocked to hear this, Priyamvada is elated. After she leaves, Vayuputra confirms with her and Vedavati realises that she said Priyamvada instead of Shravani, mistakenly. Vayuputra tells his wife that they will have to deal with the whole fiasco tomorrow.

Priyamvada goes into the kitchen to find Hamsa and Shravani laughing at her. She tells them the scenario will flip when the dawn breaks and they will be her slaves. Shravani finds the printouts of tickets to Singapore and gets excited about her surprise honeymoon. However, Vikram informs that he cancelled the tickets due to the fragile condition of his parents. But he also adds that Shravani will be getting the keys the next morning, and she will be making all decisions from now on.

In order to express that it is not a big deal for Shravani, she goes on to talk about how she is made for better and bigger things. While she will take the charge, it is only because they need her to fil the place, and not because she has been dreaming for it. Priyamvada has a similar conversation with Vayuputra, where she tells him that she is only taking the authority because of Vedavati’s ill health.

Chadarangam Trailer: Actor Srikanth Is Bound To Impress With His Digital Debut