In today's episode, Godavari finds out about the extent of Shravani's hatred for Dharani. Aditya gets his wife a packet of bangles. Read all about it. 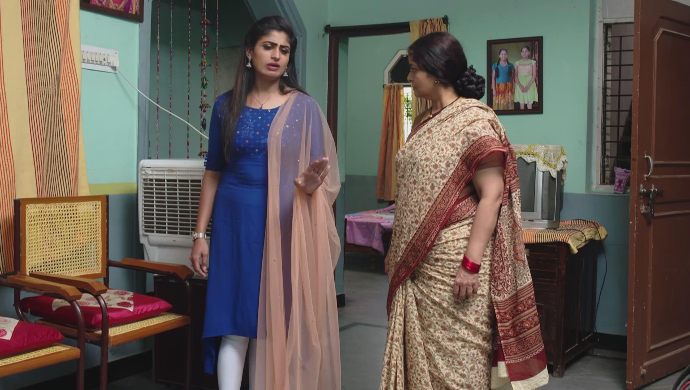 Previously in Attarintlo Akka Chellellu, Dharani frees Shravani from Saiydamma’s grip and asks her to leave. She warns Saiydamma to become a better human. Dharani apologises to Shanakarayya for breaking his heart. She meets Aditya later and he tells her to never leave him alone. Aditya sees a couple struggling to start their car and offers to help. Vayuputra and Vedavati have sent the police force to look for Aditya. They ask the people around about Aditya.

In today’s episode, the cop comes to Aditya, who is busy fixing the car, and asks if he knows the person in the picture. Aditya sees that it’s his picture and refuses to look at the cop. She insists that Aditya turn around and show her his face. Aditya smartly covers his face in grease and turns around. He tells her he has not seen any such man and goes back to work. The cop then turns to Dharani, standing farther away, and asks if she has seen him. But before Dharani can answer, the cop walks away to attend a phone call.

This puts Dharani in a dilemma. She wonders if telling the cop the truth would be a good idea since Aditya doesn’t want to go back, but at the same time, she thinks how his mother must be panicking at home. Dharani takes a step towards the cop to give her answer but Aditya comes running and takes her away. Once they stop, Dharani asks him why he dragged her away. Aditya tells him that he doesn’t want to go back home yet. Dharani offers him a handkerchief to wipe the grease off his face and they go back to the shed they were in. Dharani gives new clothes for Aditya to change into and ties a saree as a partition in the shed.

On the other hand, Godavari returns to the house and slaps Shravani. She tells her that Shankarayya has told her about everything that happened and she is disgusted to know about it. In this anger, Shravani spills her deepest and darkest truths. She tells her mother that she cannot bear her younger twin living a decent life. She needs to be at her feet, while Shravani must be ruling her. In the shed, Aditya asks if Dharani’s tying a swing for him to sleep in. Dharani sarcastically agrees and tells him that swings are for young children. And young children do not marry girls and elope with them.

Aditya takes it playfully and tells her that young children go to all extents to get what they want and so, he is a small child. Dharani asks him to change and she too goes behind the partition to change. Midway, Aditya stops are stares at his wife’s silhouette. When she comes out, he tells her that when he was young, he looked at dolls the way he is looking at her. Next, he takes out a packet of bangles from his pocket and makes her wear them.