In the latest episode of Attarintlo Akka Chellellu, Priyamvada asks Shravani if she has a twin during the Pelli Choopulu. Read the full update here. 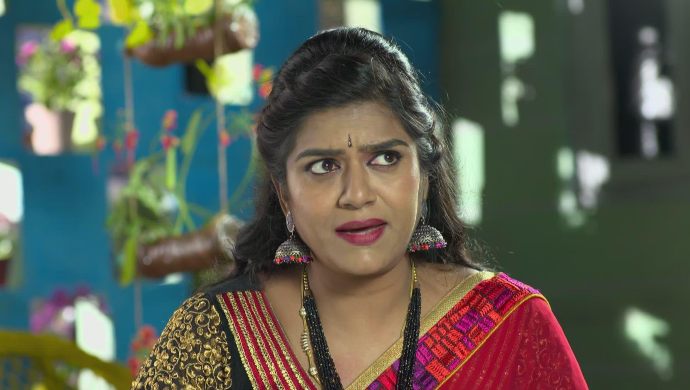 Earlier in Attarinlo Akka Chellellu, Godawari is scared that she will end up speaking about Dharani. Shravani tells her that she will not speak about Dharani if she decides not to. Vikram comes home to pick them up and Naryana asks them about the deal with calling each other amma and madam. Vikram says it’s fun for them and all of them leave. Midway, they stop to buy clothes for Vikram’s family and end up going to Dharani’s boutique. Godawari even sees Dharani hiding behind the sarees.

In today’s episode, Dharani cries hiding behind the sarees and Godawari lets out a few tears too. They speak with their eyes but Narayana and Shravani force her to leave. Vikram comes in again and asks if they have taken the saree that they want. Shravani turns on her words and tells her mother to buy the saree. Once done, the father-daughter force her to leave again. But Godawari finds a way to stay. She tells them that it would fishy for the boy (Vikram) to see them cornering her.

Shravani and Narayana step back and stand calmly. Vikram asks if they can leave or if there is any more work to be done. Godawari responds to this by telling Vikram that they can leave but she really liked the designer’s work. She asks Narayana to hand Rs. 500 to her and gives it to the boutique owner. Vikram compliments Godawari for her gesture and they all head out. Godawari turns back to see Dharani and leaves. The owner gives Dharani the Rs. 500 note and she holds it close to her heart and cries.

Vedavati, Priyamvada and Vayuputra reach the sight and are thrilled to see the colours that have been added. Vedavati asks if it’s all Hamsa’s creativity. But Shivudu tells them about the new couple who had started staying with them. Vedavati asks him to bring the new couple to their house sometime. Priyamvada remembers that Shivudu could be a threat to her if he saw Shravani. So, she threatens him to leave the sight for a few hours and not lurk around them.

Once the two families meet, Vedavati stares at Godawari because she remembers the time when she saw her in the temple. Godawari thinks how Shravani has been reaping the fruits of Dharani’s hard-work and prayers. Vedavati tells everyone that she wanted Shravani as her daughter-in-law the first time she saw her in the temple. Godawari wonders when was the last time Shravani visited a temple. Vedavati sees the hesitation on Godawari’s face and asks if everything is alright.

Shravani fears what her mother would say and responds immediately that she is hesitant because of the class difference. Vedavati tells them that there is nothing as such for them to be hesitant about. Now, they are all one big family. Narayana asks whose property it was and Vayuputra takes out the papers and hands them over to Narayana. Vayuputra adds that the land is theirs now on and also explains that Shravani will be happy in her in-laws’ house only when her parents live well.

While everything was going smoothly, Priyamvada asks them if they have any more kids apart from Shravani. Godawari starts stressing and Narayana and Shravani stare blankly. Priyamvada adds that she has seen someone very similar to Shravani and was wondering if she has a twin. Vedavati sees their silence and tells Priyamvada to not ask ridiculous questions. If they had another child, they would be here with us.

Have You Seen Nidhhi Agerwal And Hebah Prep For Zee Kutumbam Awards 2019 Yet?