In the latest episode of Attarintlo Akka Chellellu, Dharani hides behind the sarees but Godawari sees her and cries. Read the full update here 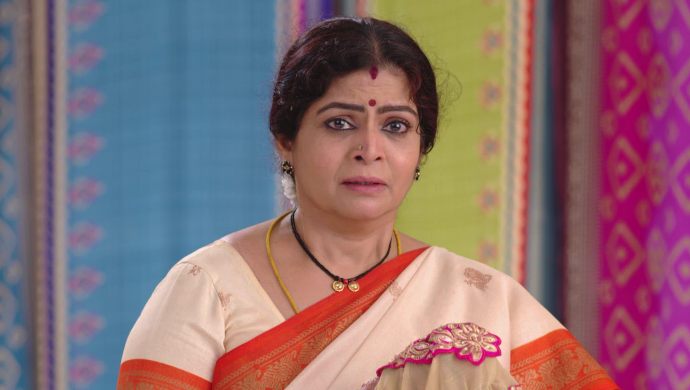 Earlier in Attarinlo Akka Chellellu, Vikram informs Shravani about the Pelli Choopulu. She seems hesitant and Vikram informs about it to Vedavati, who suggests that they move their meeting to their sight in Narsing and transfer the land on her name later. Aditya comes home from his first day at work and asks for a kiss. Dharani shies away. She gets a call about Aditya’s bad behaviour at work. Aditya tells her about the girl who was hitting on him. Dharani asks him to stay away for 30 days.

In today’s episode, Shravani begs Godawari to watch her words when she meets Vikram’s family. Neither Shravani nor Narayana want to reveal the fact about Shravani’s twin, Dharani. Before they could settle their argument, Vikram reaches their house. Everyone greets each other and Narayana asks what was the deal with ‘Madam-amma’ between Vikram and Shravani. Vikram tells him that it’s fun for them and that’s why they continue it.

Everyone prepares to leave and Vedavati checks with Priyamvada if the jeweller has left. Priyamvada first calls Aditya to make sure that he won’t be around the site and then calls the jeweller. The jeweller informs that he is already on his way. But that’s when Aditya calls Dharani to inform that he wants to take her out for lunch. But Priyamvada finds out that the jeweller is travelling in Aditya’s cab. She asks him to leave the cab and offers to pick him up on the way.

Shravani sends Vikram out to get the car started and sends her parents out too. She takes off the photo frame hanging on the wall and curses Dharani, for no reason. Aditya asks the passenger if he made a mistake or if there was some fault in his driving. The jeweller assures that there was no problem. Aditya repeatedly asks him to give a good rating on the app. He calls Priyamvada to share his location and tell him that the cab has left. Priyamvada tells him to find another cab and come alone because they cannot pick him.

Narayana asks Vikram to stop midway and goes to a boutique. He tells Vikram that it is a ritual to take something for the in-laws the first time they meet. The boutique happens to be the same one where Dharani works. The owners see Shravani and wonders how sad of a family it would to lose out on a gem like Dharani. They end up liking the saree that Dharani has designed. Vikram steps aside to attend a phone call. Narayana and Shravani scold Godawari. But she sees Dharani hiding behind the sarees and has tears of joy.