In the latest episode of Attarintlo Akka Chellellu, Aditya brings flowers for Dharani but she plays hard to get. Read the full update here 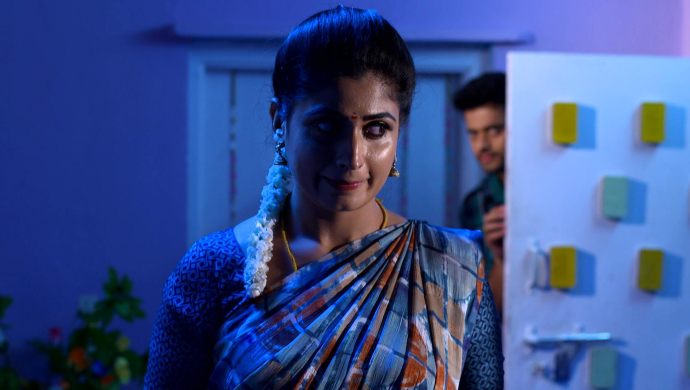 Earlier in Attarinlo Akka Chellellu, Dharani manages to bring Aditya out of the house to dry the washed clothes with her. Aditya does it and goes back inside, annoyed when Dharani tries to have fun with him. Dharani dresses up as Shravani to visit Vikram’s house. There she took blessing from Vedavati, dropped coffee on Priyamvada to find an opportunity to go inside her room. Dharani locks Priyamvada in the bathroom, finds the file and exchanges the papers.

In today’s episode, Dharani thinks to herself that Priyamvada might have been happy to find her files in place. But the real papers aren’t there anymore. Dharani tells Priyamvada that she did not hear her calls or knocks from the bathroom when Priyamvada asks. She goes out to meet Vedavati. Dharani tells her mother-in-law that she has extremely important work to take care of, and she must leave. She seeks Vedavati’s blessings and Vedavati blesses her for success in everything that she does.

Vedavati asks Dharani to be careful since she mentions the case to be dangerous and full of negativity. Dharani tells Vedavati that she has sought blessings from her in-laws and no force can stop her anymore. They all go back to their respective spaces. Vikram goes to his room and wonders why Shravani’s behaviour was so different. He thinks it must be because his mother was around them and she was being respectful. Vikram lets it go.

Aditya goes back to the Mata Ji and tells her that washing clothes was cathartic for him. Shivudu asks how so, out of curiosity. Aditya explains that he felt as he was washing Dharani’s ego and rudeness away. He adds that the problem began while drying the clothes because Dharani has some magic in her eyes that keeps pulling him towards her. Dharani feels happy to hear it but F2 reminds her to be on track. Hamsa keeps taunting him and Aditya complains to Mata Ji saying that her assistant is being too much.

Mata Ji suggests him to grow closer to Dharani, physically, by taking flowers for her. Aditya is puzzled to hear this. Mata Ji explains that if his wife takes the flowers that he brings for her, its a sign for him that she is changing. Aditya agrees to do it and takes flowers home. He keeps it on the table and waits for Dharani to take it. She decides to play with him and keeps looking at it but does not pick it up. Finally, once Aditya sleeps, Dharani thinks that she has put him through enough and takes the flowers.

EXCLUSIVE: It's About Balancing & The Numbers To Stay In The Semi-Final Of ZEE Heroes