In today's episode, Dharani meets Aditya though she tried to stay away from the family members during the Satyanarayana pooja. Read the full update. 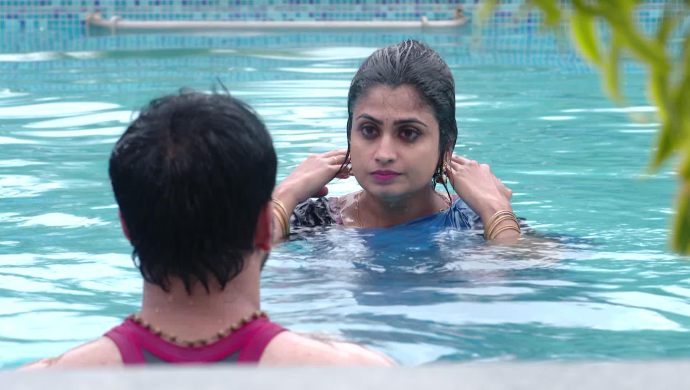 Previously in Attarintlo Akka Chellellu, Aditya tells Dharani to meet him once again. But she refuses and he forces her to meet him at his house for the Satyanarayana pooja. She has no choice but to agree. Shravani lets Vikram leave the office and purposely asks him to attend another Satyanarayana pooja on the way. Here’s what happened next:

In today’s episode, Vedavati asks Vikram about his delayed entry at the pooja. They also ask him if the ammayi was coming. Vikram freaks out but Vedavati changes the names to their relative. Dharani starts cooking and prays that no one should see her there. Vedavati’s sister-in-law sees Dharani and decides that she can never be the daughter-in-law of the house. She walks up to the chefs and asks rudely who was cooking the prasadam. The people there point towards Dharani and she goes to talk to Dharani. She diverts Dharani’s attention and slyly slides in a bunch of chopped onions into the prasadam and blames Dharani for doing something so blasphemous.

Chamundi intervenes and says that the prasadam had been prepared long back and was kept on the table. One of the other women who was cooking with Dharani says that she had purposely added onions to the dish cooked by Dharani. Chamundi, once again, calms everyone down and leaves. Another maid spills the juice on the floor, Vedavati asks who wanted the juice and the maid says it was for Aditya. Vedavati asks the maid to clean it and goes to give the juice to Aditya. But Chamundi asks Dharani to do it. But some force, Dharani agrees to do it but is stopped midway by Vedavati’s sister-in-law.

Dharani reaches near the pool, where she was told to meet Aditya. But she sees no one. So, Dharani decides to keep the glass nearby and leave without having to meet Aditya. But just as she turns around, Aditya jumps out and Dharani feels frightened. Aditya swims near Dharani and thanks her for coming home. Dharani tells Aditya that she has come home for the catering services. Aditya tries to tell her how they met because he really wanted to meet and names it – sankalpabalam (something like a cosmic force). And so, he prays for something again. Dharani takes this as an opportunity to get away from him and steps aside… but falls into the pool instead.

Maate Mantramu: 6 Scenes That Made Our Hearts Skip A Beat In The 15 July 2019 Episode