In the latest episode of Attarintlo Akka Chellellu, Aditya understands his mistake and apologises to Dharani. Read the full update here. 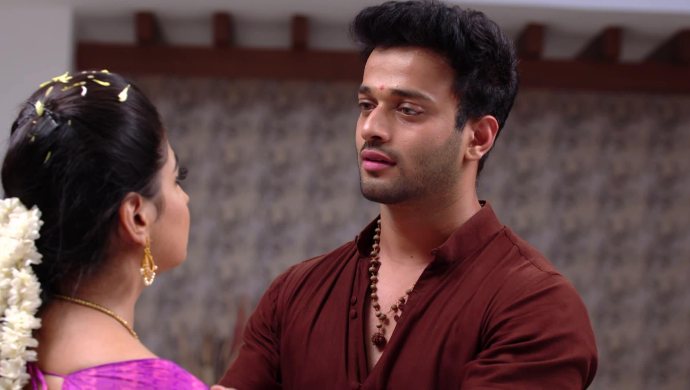 Earlier in Attarintlo Akka Chellellu, Aditya sees his accountant and goes to him. Upon talking to him, Aditya finds out that Priyamvada had plotted everything against Dharani. He goes home and slaps her. When Priyamvada tries to fuel his rage and tells him to take his tablets, Aditya wonders if she changed the medication, too. He goes to the doctor and finds out the truth.

In today’s episode, Dharani continues to do her pooja, religiously, while Priyamvada paces back and forth waiting for the clock to strike 6 pm. That’s when Aditya comes back home, and calls Priyamvada from the doctor’s phone. Just when Priyamvada asks for her safety in the situation, Aditya walks into her room. He drags her out and pushes her towards the sofa. Aditya holds her by the neck, and Priyamavada begs for mercy.

That’s when Priyamvada sees Dharani like a goddess asking for the right answers. Dharani, who couldn’t get up from her seat, looks at Aditya with concerned eyes and asks him to let her go. Aditya drags Priyamvada close to Dharani, as she finishes her pooja. He goes close to her and apologises for his behaviour. He also promises to listen to Dharani from now on. Aditya asks her what they should do with Priyamvada, but Dharani asks him to go to his room.

Then, Dharani goes to Priyamvada’s room and warns to stay careful. Shobhan Raju goes to Priyamvada and scolds her for trying to overact her way out. Aditya asks Dharani why she had sent him away. She shares her fears about Priyamvada-Vayuputra and asks Aditya to support her. Aditya agrees to it but feels wary of pretending to be angry at her in front of others.

Kailasapuram Review: This ZEE5 Original Brings The Dark Side Of The Society Into…