In the latest episode of Attarintlo Akka Chellellu, as instructed by Mata Ji, Aditya goes to wash his own clothes. Read the full update here 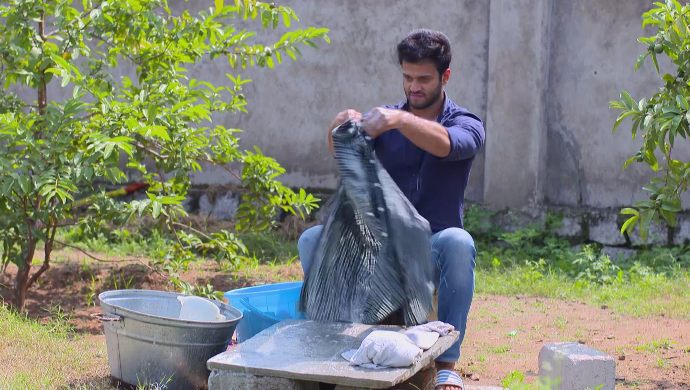 Earlier in Attarinlo Akka Chellellu, Aditya goes to a Swamy Ji for some solution but he happens to be a fraudster. Dharani decides to turn the tables around and pays him Rs. 500. She gives him a number for Aditya to call and meet. She asks F2 to create a set up where Aditya could come and meet them, while they disguise themselves. Shravani is unhappy to know that Aditya holds 42% shares but asks Vikram to stay positive for the board meeting. He promises her that the next agenda is their marriage. Aditya is awestruck to see Mata Ji’s magic.

In today’s episode, Dharani, as Mata Ji, starts talking about Aditya and Dharani’s love story before their wedding. After the first few instances, Aditya is in awe of the Mata Ji. She tells him to change himself in order to succeed in changing his wife. He asks her how that would be possible. Then Mata ji explains that you need to take another path to make things work when they aren’t going as planned. Aditya understands her point and agrees. She tells him to call her every once in a while to ask about what has to be done.

Dharani and Hamsa get back into their regular avatars and go to wash clothes. Aditya comes home early and replies rudely when Dharani asks how he was home already. Aditya remembers what Mata Ji told him and goes back to her to inform that he came back home early to avoid the traffic. He goes inside the house and calls Mata Ji to tell that it’s difficult to speak politely to Dharani, who always has a grumpy face. Aditya talks about Hamsa, who is more like a ‘Himsa’ to his sanity.

Outside Dharani and Hamsa become furious to hear his words but they try to keep calm anyway. When Aditya asks what he should do next, Hamsa angrily tells him to watch clothes. Dharani tries to cover up but Aditya makes up his mind to wash clothes and tells Mata Ji that he will do whatever she asks him to do. He goes out and tells Dharani that he wants to wash his own clothes. Dharani and Hamsa try to act surprised and let him do it after some initial hesitation.

Aditya starts and does not stop until he is done. Shivudu comes in between and asks if the ladies are bullying him into doing it. But Aditya tells him that he wants to do it on his own and then chants, “Jai Mata Ji!”. Hamsa signals him to understand and he leaves. Aditya crashes on the bed once done, but Hamsa tells Dharani to make him hang the clothes to dry too. Like that, maybe they can grow closer. Dharani calls him and Aditya tells her that he did it with aggression but now he is utterly exhausted.

Not For The Weakhearted! Watch Neither Either Really Dead, A One Of A Kind Murder Mystery, On ZEE5