In today's episode, Dharani, Aditya, Vikram and Shravani all end up at the same place for the Satyanarayana pooja. Read the full the update here. 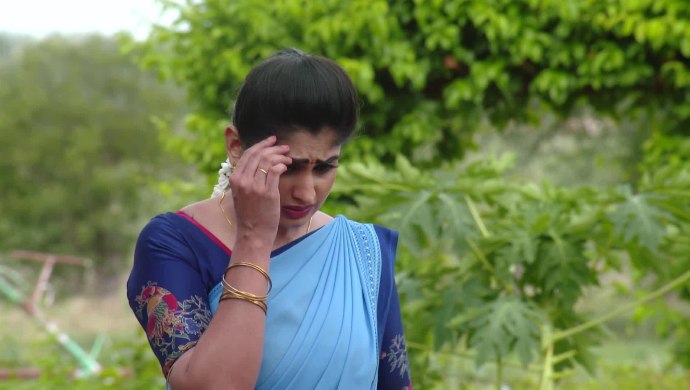 In today’s episode, Shravani finds herself thinking about Vikram and his love but keeps repeating that getting her to fall in love with anyone isn’t an easy task. Dharani, along with more women, travels in a roofless truck for the catering services at Vedavati’s house. Dharani keeps thinking that she must keep herself away from Aditya so that there are no obstacles for Shravani’s wedding with Vikram. In the meantime, her truck takes a turn towards Aditya’s house. Godavari keeps thinking to herself about how bad Dharani’s life is, out loud. That’s when Shankarayya steps inside the house and calls out for Dharani.

Shanakarayya is upset to know that Dharani isn’t home and now he can’t click her picture for his new phone’s wallpaper. Godavari tells him that she will return late in the evening and Shankarayya leaves. Godavari prays to god to stop Dharani’s wedding with Shankarayya and save her life. Vedavati and her husband welcome guests home for the pooja. They talk about how Shravani’s presence would make it better. Just then, Dharani’s truck reaches in front of Vedavati’s gate and she hesitates to get down. She prays to god to keep her identity a secret.

Dharani tries to escape from the pooja and tells others to handle it on their own. Dharani tells them to not mention anything about her absence to Chamundi Akka, but she was standing right behind. Chamundi drags Dharani to meet Vedavati in order to understand the requirements for the pooja. Vedavati’s sister-in-law steps in and stops them from meeting Vedavati and asks them to get started with the work. This she does because she wants to keep Dharani, who she thinks is Shravani, away from Vedavati’s sight. Vedavati calls Chamundi anyway and tells them to prepare the prasadam soon. Vedavati’s sister-in-law thinks that she needs to kick Shravani (Dharani) out of the house at the earliest to avoid any complications.

Stay tuned for more updates. In the meantime, check out ZEE5 Original film Ala, streaming now.

Need A Quick Fix? Dedicate These Songs To Your Special One And Brighten Up The Mood

7 Defining Moments From 7 Episodes Of ZEE5 Original Series N.E.R.D. You Need To Know Of