In the latest episode of Attarintlo Akka Chellellu, Priyamvada talks about Shobhan Raju to Shashikala, who can kill Dharani. Read more here 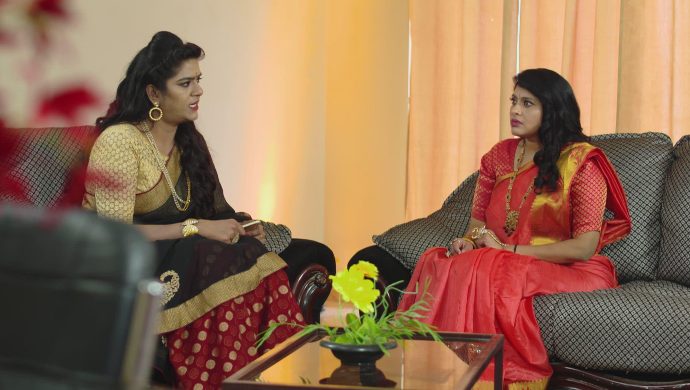 Earlier in Attarintlo Akka Chellellu, Shashikala boasts about bullying Vayuputra when Dharani calls her, and pretends to be apologetic. Then, Dharani informs that Shashikala’s green tea had poison in it. When Shashikala decides to drop all her evil plans, Dharani tells her that an antidote is in the car. However, that antidote turns out to be the real poison. When Vayuputra comes home Vedavati calms down and turns her concern towards Dharani. Hamsa covers up by lying that Dharani was at the temple.

In today’s episode, the lawyer stands outside Shashikala’s ICU room and tells his henchmen how he had warned her against messing with Dharani. Dharani goes inside the room to extend her greetings to Shashikala. She suggests Shashikala step aside and not mess with Dharani’s family anymore. Dharani also adds that she showed her what death looks like, it wouldn’t be a big deal to kill her entirely, next time. Dharani goes to the temple and quickly comes back home. She meets Priyamvada in the lawn.

By then, the lawyer had given a low-down to Priyamvada on all that had unfolded in the last few hours. Dharani gives the prasadam to Priyamavada and assures that she hasn’t mixed anything in it. She reminds her aunt how Shashikala has never favoured her, and why Priyamvada should not get any closer to Shashikala. Priyamvada feels threatened and reconsiders her partnership with Shashikala. That’s when she calls Shobhan Raju and screams at him, out of frustration. Shobhan Raju maintains his peace and tells Priyamvada to forget about her daughter if she cannot help him get out of jail.

This Festive Season, Feast On This Gluten-Free & Healthy Cake By Upasana…

While Shashikala thinks of her next move, Priyamvada drops by her house. Shashikala expresses her frustration on being fallen prey to Dharani’s plans. Shashikala explains that she cannot let her stay alive anymore. That’s when Priyamvada claims that they shouldn’t make any move because Dharani is smart enough to catch them red-handed. She also talks about Shobhan Raju, who can kill her without any problems to them (Priyamvada and Shashikala).