In the latest episode of Attarintlo Akka Chellellu, Vedavati slaps Dharani when Priyamvada proves that Dharani is at fault. Read the full update here. 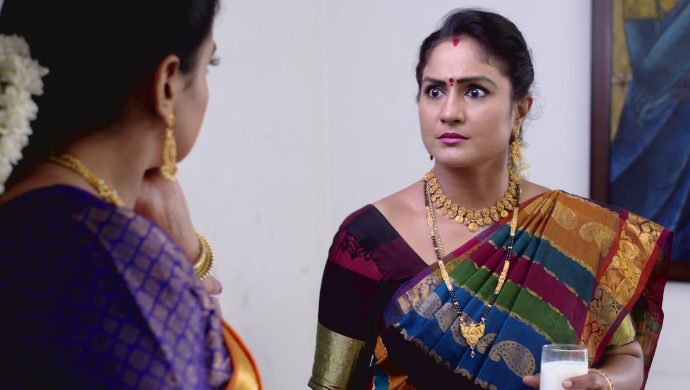 Earlier in Attarintlo Akka Chellellu, Priyamvada finds out that Dharani has been texting her all along from Aditya’s phone. This makes Priyamvada angrier. She decides to extinguish the deepam, after the pooja, since it would be a bad omen for Vedavati. Vikram gets busy talking to Koya Dora about his married life. At the same moment, Shravani comes and interrupts the conversation. She takes Vikram home when they see Dharani, who goes to meet the accountant.

In the latest episode, Dharani speaks to the accountant’s father, and asks him to hand over the files immediately. He tries to escape, but Dharani explains that she knows everything that has been happening. That’s when the accountant opens up about Priyamvada’s warning call. Dharani feels at ease after getting some answers, but she continues to be worried about Hamsa’s changed behaviour. Shobhan Raju sees a new jail inmate grinding some leaves. He approaches the inmate and asks about his intentions. The inmate explains that the paste of those leaves will help in healing the wound faster.

Intrigued by this, Shobhan Raju enquires more and finds out that the man was a herbal doctor, but he killed someone using his knowledge and now he’s in jail. The former asks the doctor about the herbal medicine that he used to kill someone, and tells him sks the doctor to prepare some for him. Sometime later, Shobhan Raju gathers a bunch of his friends and the constable. He instructs them on performing a skit, where they are named Priyamvada, Dharani, Hamsa and Vedavati. He gives them a situation and watches them act it out.

Similarly, Dharani hands over the glass of milk to Vedavati, and Priyamvada stops her from drinking. She adds that Dharani has mixed a poisonous liquid in the milk which would cause her to die. Priyamvada also brings Hamsa along to put the blame on Dharani. Dharani denies it. Annoyed by all this, Vedavati loses her temper and slaps Dharani. Vedavati apologises to Priyamvada for being so naive with her decision and asks her to take over the Pettanam. Just as that happens, Shobhan Raju shouts “cut” in the jail and reels in the happiness of the perfection of his plan.

He calls Priyamvada and tells her the plan. He also threatens her by saying that he would come to kill her if she failed this time. Priyamvada asks him to send the liquid and promises to not lose out on this opportunity. Dharani comes home and asks Vedavati to take rest while she promises to take care of the deepam.