Dharani thinks that maybe he is talking about her and Aditya's story. Read more about it here. 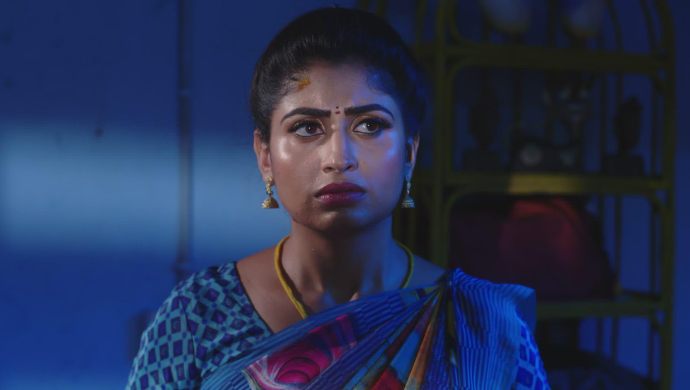 Earlier, in Attaritlo Akka Chellellu, Shravani signals Dharani to leave from the restaurant. Aditya and Dharani come back home from the hospital. F2 helps them in reaching home safe and sound. He keeps discussing business ventures and promises to help Aditya in perfecting rickshaw driving. Dharani is annoyed of him brainwashing her husband and asks him to go away. When Hamsa offers to buy Dharani a saree on his behalf, he strictly asks her not to. Shivudu goes to the hospital to meet Saiydamma and asks why did tried to kill herself. Shravani postpones her plan of meeting Vikram’s parents because she was annoyed with Dharani.

Saiydamma narrates everything that happened on the day of Shankarayya and Dharani’s wedding. Shivudu feels angry and promises to bring them together, and back home. Aditya and Dharani sit in their lawn and Dharani prepare to massage Aditya’s fractured feet. He flashes the widest smile and before she could do something, he offers a rose. She smiles and keeps it aside, she is about to pick the oil when Aditya gives another red rose, and then another one. Dharani tells him to stop and asks him to spread his leg over the bed.

As Dharani applies oil on Aditya’s feet and massages it, Aditya is taken aback by the memories of his mother. He remembers how she would stay by his side and take care of everything. Dharani asks if he is missing her, Aditya tells that his aunt is better than his mother because not only did she visit him in the hospital but also gave money when needed. Dharani tries to explain that no mother can be bad. But Aditya tells Dharani that she dismisses his views and expects him to listen to her.

Hamsa brings fresh veggies for them and offers it to Dharani. She asks what they were fighting about and Aditya narrates her the story. Hamsa, too, tells Aditya that one must not believe anyone above their mother. She tells him that she, too, has a sister-in-law. But their lives have been better since they got away from her. When Dharani ties the bandage to Aditya’s feet, Hamsa interrupts and offers to do it properly. But she ties it too tight and Aditya yells in pain. As she leaves, she playfully teases him and pinches his cheeks.

At night, Shravani tries to connect everything that she had seen in the restaurant. And she concludes that Aditya is a driver, not a rich brat. Technically, Dharani isn’t married into a rich house, so, she still has an upper hand over her. Shivudu comes home drunk and Hamsa asks why he did that. He tells him that he met his sister and she is in a bad state. This made him drink to his heart’s satisfaction. He also tells her about what happened and decides to take revenge against the girl who wronged his sister.

Hamsa is happy that the girl left because his sister would have been killed in her hands. She does not say anything to her husband, though. Aditya tells Dharani that the girl, in Shivudu’s conversation, did not do any wrong. Why is Shivudu trying to blame her? Dharani tells him to not barge into their familial matters and to leave them alone. But she also tells him that Shivudu’s sister’s story sounds a lot like theirs. She wonders if Shivudu is Saiyadamma’s brother. Aditya confidently rejects it by saying that they have nothing in common.

Vikram looks at the time and thinks that Shravani might not have slept yet. So he calls her, Shravani picks up and sweetly says, “yenti amma“. This thrills Vikram and he starts flirting with her. But Shravani isn’t in the mood and asks what the call was about. Vikram tells her that his mother was happy to know that she refused to come home. Shravani doubts if his mother does not like him. But Vikram clarifies that his mother said so, because of her consideration.

Brother Of Bommali Jukebox: Move Over Stand-Up Comedy, Treat Yourself To Musical Comedy