In the latest episode of Attarintlo Akka Chellellu, a girl fights with her boyfriend and then hits on Aditya in the cab. Read the full update here 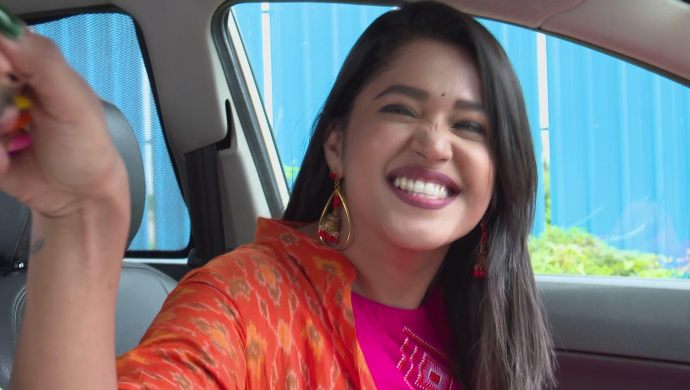 Earlier in Attarinlo Akka Chellellu, Aditya goes on the first day of work and keeps calling Dharani after each of his trips. Dharani tells him to keep calm and control his anger. F2 tells him to focus on driving and not be bothered by the passengers’ behaviour. Shivudu tries to spray chloroform on F2 so that he could take Dharani away to Saiydamma.

In today’s episode, the passenger in Aditya’s cab stops fighting with her boyfriend and apologises to Aditya for being so harsh on call. He ends up telling her that when two people are in love they want to be in each other’s mind all the time. She asks him to stop the cab and comes ahead to sit next to him again. At night, Vikram calls Shravani to tell her about the Pelli Choopulu next day and Shravani hesitates about her house but agrees.

Vikram tells Vedavati that Shravani is hesitant about them going to Shravani’s small house. Vedavati suggests that they could meet at their sight in Narsing instead. And after the Pelli Choopulu, they will transfer the land on Shravani’s name and even build a decent house for her parents. Vikram says it’s a great idea. Priyamvada overhears this conversation is freaks out because if they all go to the sight, they will meet Aditya and his wife. So, she decides to get them out of the way.

Aditya picks up Priyamvada’s call and informs that he is driving the cab. Priyamvada is happy to know that she brought the prince of their house down to being a driver. Aditya tells her that he wants to earn a lot and make his wife happy. Aditya goes home and tries to ask Dharani for a kiss. Initially, she shies away but the other cabbie calls her to inform that Aditya’s behaviour hasn’t been good and the company wants him to discontinue. But Dharani insists and gets him a second chance.

Aditya explains that he had to drop a girl midway because she tried to flirt with him and even touched his nose and called him cute. Dharani is disturbed to hear this. She takes him outside the house and washes his nose. Aditya tries to tease her for being jealous, so Dharani tells him that the nose will be dirty for long and he can’t come close to her for at least 30 days. Shravani gets ready for the Pelli choopulu the next day and Godawari insists on telling the truth about Dharani. They all have an argument again.

Maate Mantramu: 6 Things Vasundhara Did That Prove She Can Go As Far As She Wants For Love