In today's episode, Shravani asks Vikram to tell her about the one thing that he wanted to share. Vikram hesitates but tells her that he loves her. 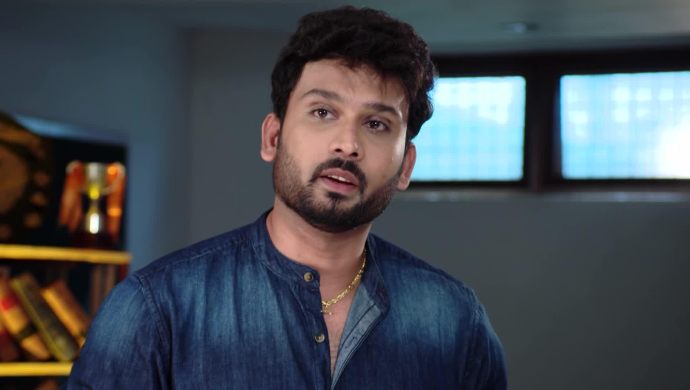 Previously in Attarintlo Akka Chellellu, Vedavati confirms a date for the Satyanarayana pooja with the priest. She starts preparing for the function, too. On the way, Vedavati meets Shravani and tells her about their last meeting, which was in fact with Dharani. During their conversation, Shravani also learns about Vinay’s real identity and his real name — Vikram.

In today’s episode, Vedavati drops Shravani near her office and asks her to meet once again. She remembers about the Satyanarayana pooja and invites her home for it. She asks what Shravani was thinking and assumes that it’s about Vikram’s reaction. Vedavati tells her that the real fun will be to see what Vikram does when he sees her at home. Vedavati hands over the visiting card, with address, and asks her to come home without fail. Shravani decides to play along. In the office, Vikram thinks of how he can escape from the office before time for the pooja and acts accordingly so that his boss does not doubt him.

Vikram sees Shravani staring at him and greets her. He asks why she was staring at him. She says that the shirt he is wearing is a new one, although it looks costly, he tells her that it’s only for Rs 200. Shravani tries to taunt him and tells him that he looked like an actor. He compliments her by saying that she looks like a doll in the langa-voni attire. Shravani reminds him to talk about the thing that he wanted to share the other day (with Dharani). Vikram hesitates, but says ‘I love you, madam!’. Sparks fly between both of them and Vikram tells her that he can spend his life just looking at her, that’s how much he loves her.

Shravani snaps her fingers and Vikram comes back to reality. She asks again and Vikram tells her that he needs to leave early because he has agreed to work for someone’s catering business. Shravani plays along and tells him that it would’ve been better if his catering business and her Satyanarayana pooja happened at the same place. She shows the visiting card and asks if that’s the location he has to go to. Vikram stutters and says no. Finally, Sharavani allows him to take leave. Shankarayya buys a new phone and tells his mother that he bought a smartphone to keep Dharani’s photo as wallpaper. Saiydamma tells him that he must ask for dowry if he wants to fulfil all such wishes. Smartly, Shankarayya tells her that Shravani is a lawyer and will put them behind bars if they ask for dowry. Saiydamma understands Shankarayya’s craze for Dharani and decides to stay calm until the wedding.

Dharani sees an old man taking a cycle-rickshaw full of heavy sacks and helps him push it. Aditya sees this and stops his car. He runs behind Dharani and catches up with her speed. He silently goes ahead and pulls the cycle. The old man asks them to stop and blesses them. Dharani tries to leave, but Aditya stops her. She tries to make conversation but Aditya stops her again. He invites her for the Satyanarayana pooja but Dharani refuses. He tells her to come anyhow since after her marriage with Shankarayya, she won’t meet him. Dharani says she can’t make it but Aditya forces her to come. Dharani finally says yes and leaves.