In the upcoming episode of Attarintlo Akka Chellellu, Priyamvada tries to blow away the pooja deepam but Dharani saves it. Read the full update here 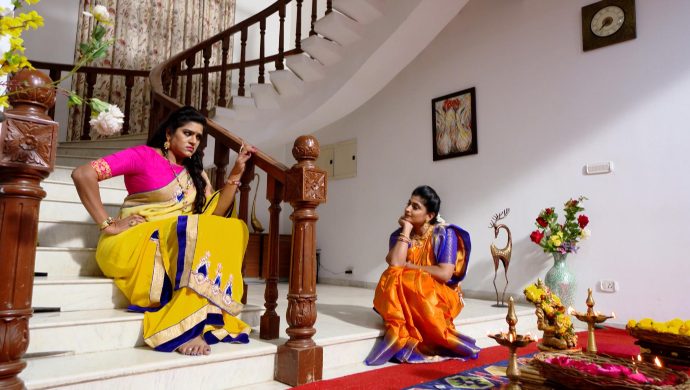 Earlier in Attarintlo Akka Chellellu, Vedavati calls Dharani to hand her a cheque of Rs 50 Lacs and asks to pay the pending amount for her parents’ house. She also asks Dharani to be more careful with educational funds, while giving the liberty to use money from personal accounts. Shravani gets out of the pooja, despite the ladies trying to stop her, by brashly talking to them. Vedavati and Dharani start panicking when they do not find the goddess idol. But Aditya, who had seen Priyamvada steal it, texts her to bring it back before it announces it to everyone.

In the upcoming episode, Priyamvada sees that Dharani has prepared for the pooja and has lit the deepam. She decides to blow them away since it will be a bad omen for Vedavati. But before she could do it, Priyamvada slips and falls on the stairs. Dharani comes up to her and asks rhetorically if she knows who spilled the oil.

Valentine’s Day Special: Take Inspiration From Our Tollywood Ladies To…

No 1 Kodalu 11 February 2020 Written Update: Sarsu Reveals The Truth About Her Visit