In the latest episode of Attarintlo Akka Chellellu, Aditya gives Dharani a trip and goes off to the first day of his work. Read the full update here 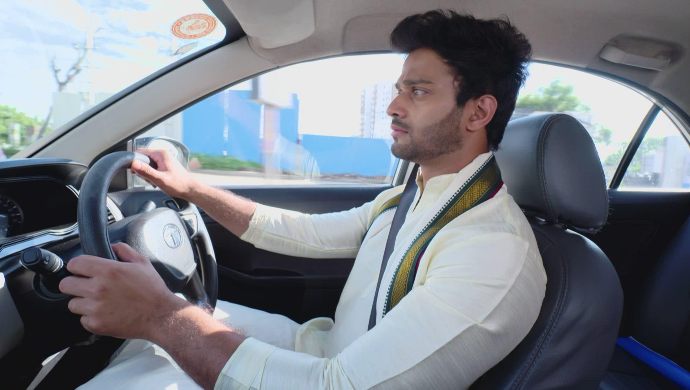 Earlier in Attarinlo Akka Chellellu, Dharani gets Aditya ready for work and gives him new clothes. She prays for Vedavati’s blessings because she is about to send him on a journey to becoming a better man. She applies some kohl behind his ear to fight off the evil eyes. Shivudu is happy to know that Aditya will not be an obstacle for him now on and he can take away Dharani easily. The cabbie brings a new cab for Aditya and asks Dharani to perform a small pooja for it. Dharani does it and the latter awaits excitedly to drive the car.

In today’s episode, the cabbie asks Dharani to stand in front of the car and tells Aditya to start his journey. Once Aditya moves the vehicle, he asks Dharani to sit inside because he wants her to be his first customer. Dharani sits inside and Shivudu offers to join them. But the other cabbie asks Shivudu to wait outside because his first trip shouldn’t be a shared one. Aditya and Dharani are in the cab and he remembers his dream. Aditya tells him that half of it is complete but it’s not raining or thundering. Dharani tells him that if it’s meant to be it will be.

At that moment, a bike suddenly comes in front of Aditya’s car. This scares Dharani and she hugs Aditya just the way he had dreamt. They move ahead and Aditya drops her back at home. Dharani sends him off to work and goes inside. Shivudu thinks that he has to complete his work anyhow today. But that’s when F2 comes home. He asks for Aditya but Dharani tells him that he will be at work and will come home in the evening.

Shivudu tells him that since Aditya is not there he must go back and come when Aditya returns. F2 refuses to go back and offers to keep Dharani company until he comes. Shivudu wonders why everyone wants to ruin his plans and goes inside the house. He thinks that first he must get F2 out of the way and sprays some chloroform on a handkerchief to get F2 unconscious. Shravani sees Aditya driving a cab and feels happy that he is just another driver, not a millionaire.

Aditya calls Dharani to tell him about each of his trips. He got angry at the first passenger because he banged the door. Dharani tells him to avoid showing his anger. He calls again to talk about his second trip and affirms that he spoke softly and did not scold them. When Shivudu approaches F2 to get him unconscious, F2 stands up and asks Dharani for the phone to talk to Aditya. Later, Aditya picks up yet another passenger who tries to make her boyfriend jealous by complimenting Aditya.

EXCLUSIVE: ZEE HEROES Get Ready To Cross The Big 'Z' To See Some Colours