In the latest episode of Attarintlo Akka Chellellu, Shashikala poisons herself when Dharani gives her a way to save herself. Read more here 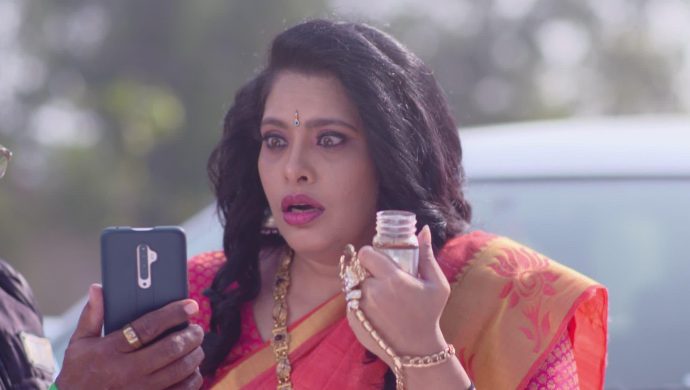 Earlier in Attarintlo Akka Chellellu, Vayuputra and Shashikala meet each other, and Dharani follows them to eavesdrop on their conversation. Vayuputra tries to make peace and tells her to focus on work rather than doing stupid things. But Shashikala threatens to kill him, or anyone from his family. She also assures that the next time, she might not miss the target. Dharani hears it all, and sits on Shashikala’s seat after she leaves.

In today’s episode, Shashikala boasts to the lawyer about how she has managed to hit the bullseye, by talking about the family to Vayuputra. Dharani calls Shashikala, who expects Dharani to apologise for being mean and rude. And as she expected, Dharani apologises to Shashikala and asks requests her to let go of all matters –  so the two families could live happily, The lawyer, who was silently listening to their conversation, thinks that something is not right. Because he is unable to sense the fear in Dharani’s voice, which her words claim.

Shashikala continues to take pride in her deeds, and in a few moments, Dharani tells her that she will not be around to warn or kill anyway. She explains that Shashikala’s green tea had poison mixed in it, and she is the one who fell in a trap. Shashikala starts worrying and asks the driver to park the car aside. She steps out of the car and asks Dharani to help her save herself. Shashikala stresses about her desire to live, to a point that she is ready to let of her business and the rivalry. Dharani tells her about an antidote kept in the car. Shashikala gulps it down, only to find out that, it was the real poison.

The lawyer sees foam forming on the brink of Shashikala’s lips, just as Dharani spoke about it. Shashikala tries to keep herself alive, and begs everyone around her to take her to the hospital. At home, Vedavati continues to cry, because her sons let Vayuputra meet his enemy alone. Finally, Vayuputra arrives and takes her in his arms. He consoles her and assures that they do not have any problem. Vedavati asks where Dharani was, but Hamsa covers up by lying that Dharani was at the temple.