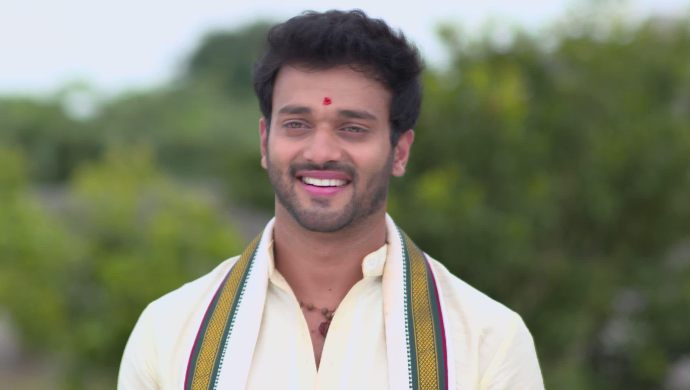 Earlier in Attarinlo Akka Chellellu, Aditya tells Vedavati about everything Priyamvada told him. He tells her that he does not want to come home because of her. Vedavati exclaims that it’s all a lie and wonders why Priyamvada would do something like that. Dharani believes that now would be the right time to meet her mother in law and goes ahead. Vedavati is surprised but accepts her gracefully when she learns the truth. That’s when a priest comes to Dharani and snaps out of her daydream. Before she leaves, Dharani gets special clothes from Vedavati, by chance, and also seeks her blessing.

In today’s episode, Priyamvada tries to belittle Vedavati for believing that her younger daughter-in-law was at the temple. But Vedavati insists on sticking to her beliefs and goes to the kitchen. Vikram and Vayuputra tell Priyamvada to stop arguing about everything and let Vedavati be happy, for once. The next morning, Dharani wears new clothes and does the Tulasi pooja. Once done, she goes back inside the house to wake Aditya up but he refuses to wake up.

Dharani tells him to continue and she will refuse the cab offer. Aditya quickly gets up and sits straight. He tells her that he woke up a long time ago but did not want to open his eyes because of the lovely dream he had. Then he asks if morning dreams truly come true? Dharani tells him that since it was a merry dream, it will. She asks him to tell her about the dream and Aditya explains that it was raining mildly and they were driving in a vintage car. But as the thundering strikes, she hugs him and they get lost in each others’ eyes.

He asks Dharani if his dream will ever come true. Dharani says yes but rushes him to get ready. Aditya comes out of the bath and Dharnai helps him dry his hair. She asks him to stay still and takes a closer look at his scalp to find two swirls. She tells him that it means he will have two wives and asks who the second one was. Aditya gets scared upon hearing this and tries to convince her that there is no one other than her. Dharani laughs out and tells him that she was joking.

Aditya sees Shivudu starring at them and asks if he is missing Hamsa, Shivudu does not reply. Dharani tells him to watch his words and takes him inside. Before handing over the new clothes to her husband, Dharani thinks to herself that she will be starting what Vedavati has always wanted – to make Aditya into a better human. She prays for Vedavati’s blessings and gives the clothes to Aditya. Once he is ready, Dharani takes some kohl off her eyes and applies it behind Aditya’s ear – so that the evil eyes stay away from him.

Dharani tells him to work well, stay safe and return home safely. Aditya asks what he will get in return and Dharani offers to cook payasam for him. He taunts to make more things and she agrees, without getting his hint. Finally, Aditya tells Dharani that he wants to spend some romantic time with her once he comes back. He claims that until she agreed to it, he wouldn’t go out. Dharani agrees and the cab arrives.

EXCLUSIVE: This Is The Last One For Me, Says ZEE5 Original N.E.R.D. Director…

6 Scenes From Episode 1 Of ZEE5 Original N.E.R.D That Will Make You Curious…

Shivudu is surprised to see the cab and wonders if they are going out. Because if that is the case, his work would remain incomplete. But Aditya tells him that he will be starting a job today and it takes Shivudu happy to know that he has more opportunities now on. Dharani takes the pooja plate outside and performs a small pooja for the cab.