In the latest episode of Attarintlo Akka Chellellu, Dharani drinks alcohol kept in the glass by Shobhan Raju-Priyamvada. Read the full update here. 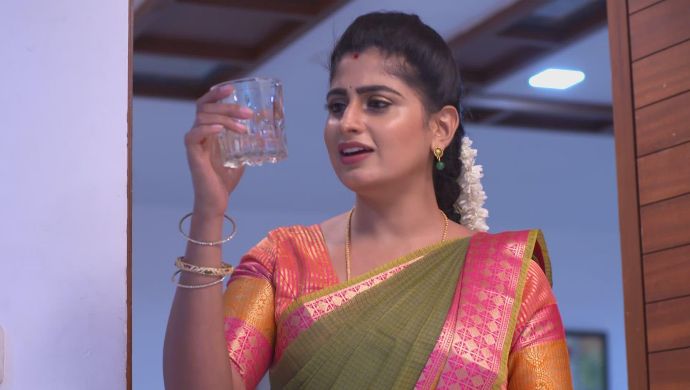 Earlier in Attarintlo Akka Chellellu, Dharani decides to play safe because she understands the threat. Priyamvada and Dharani tell Vayuputra to bring Shobhan Raju home for various reasons. When Priyamvada tries to convince Aditya into marrying her daughter, Dharani overhears everything. She scolds Aditya for listening to it, for thinking to marry another woman. Finally, after much convincing, Vayuputra manages to bring Shobhan Raju home.

In today’s episode, Shobhan Raju takes his right foot back and enters the house by stepping in with the left foot first. This is considered to be a bad omen, and he smiles wickedly as he steps inside. Later, he goes to the kitchen and asks Dharani if she failed to understand his power. Dharani, who was preparing green tea for him, explains that she had a role to play in bringing him home. This way, she could be more aware of his move and dirty plans which will help her.

Vedavati and Aditya see him inside, and Aditya asks for the reason behind his jail-term. Nobody answers the question, and Dharani asks him to avoid hurting them. In the evening, Priyamvada sees Shobhan Raju sitting with a glass and bottle of alcohol. He preps his first peg as Priyamvada continues to nag about his behaviour. He hands the glass over to her, and asks her to make sure Aditya drinks it. This would alter his behaviour and Aditya would be violent with his wife.

Priyamvada feels happy to know of this move, and goes ahead. But she leaves the glass on the table when Vayuputra calls her, to warn her about her husband’s behaviour. In that time, Dharani tastes Hamsa’s pickle mix and feels it to be extremely spicy. She ends up drinking alcohol, mistaking it for water. Dharani gets drunk and goes to her room. She starts pulling Aditya’s ears, hair and cheeks while questioning his intentions to marry someone else.

Priyamavada searches for the glass and feels happy to find it in Aditya’s room empty. She asks him about the marriage again, but he tries to avoid her. Dharani, who was locked inside the bathroom by Aditya, comes out with a broom and starts beating Priyamvada. At one point, Aditya feels happy that Dharani taught a good lesson to Priyamvada. But Dharani goes back to him and starts again. She falls asleep on his chest while chanting that she cannot leave him.

Trinayani Weekly Update 2 to 7 March 2020: Nayani Gets Heckled Out Of Every…

Trinayani Weekly Update 2 to 7 March 2020: Nayani Gets Heckled Out Of Every Place